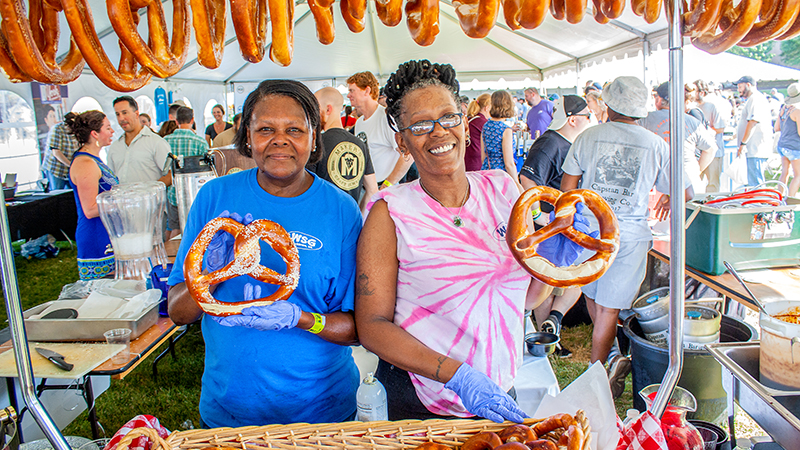 The annual Yorktoberfest event enjoyed a change of venue this year along with 48 beers on tap, Germany-inspired food, music, beer classes and more.

Held at Riverwalk Landing on Sept. 22, the Sunday afternoon event had more than 1,000 visitors in great weather.

“This is one of the biggest parties on the waterfront all year long,” said Aras Sadjadi, a board member of the York County Chamber of Commerce and director of the event. “It’s been a great experience. We really appreciate the county support.”

The event has been an annual occasion for about seven to nine years, said Chris Davidson, president of the board of directors for York County Chamber of Commerce. Proceeds from the event go toward the Chamber’s efforts to support small businesses.

The event started in the historic Freight Shed building and then grew into the Hampton Roads Harley-Davidson dealership, where it was until this year.

“This is our first time being down on the water,” Davidson said. “The change works great for us, mainly because we want to keep our branding and alignment with York County, and this is a purely York County space. Being able to come down to the Riverwalk Landing, Yorktown waterfront, is we think a step in the right direction. It makes sense to have this event down here.”

Blue Night Jazz and The Kings of Ukulele provided the music, and several of the breweries also discussed their brewing process at classes held every hour on the hour.

Several first-timers at the event said they were glad they came.

“I’ve seen it before, and we decided just to volunteer for a few hours and then enjoy the festival afterwards,” said Adrienne McNeill. She said she enjoyed the good variety of beers that are available.

Michael Johnson also said he enjoyed the beers and that he and his family would definitely come to the event again.

“This was a good event,” he said. “It was nice, something to do, to get out of the house — and you can’t beat the scenery.”

Davidson said the event is not only for the Chamber and the business community but also for the community at large.

“It’s an event for the community to come together,” he said. “The York County Chamber of Commerce is all about helping businesses thrive and succeed. It’s not just about the business, but it’s about the family behind the business. This event is really the culmination of all of our efforts throughout the year to cultivate that family environment. Yorktoberfest is about one big York County family driven by an organization dedicated to small business.”

“I’d really like to thank the committee,” he said. “This would not have happened if not for the vision of Aras.”

Sadjadi returned thanks to the Chamber and to the county and community.

“The community came behind us, and they wanted this,” he said. “Without the Chamber of Commerce, this wouldn’t have happened. It’s been a great experience.”