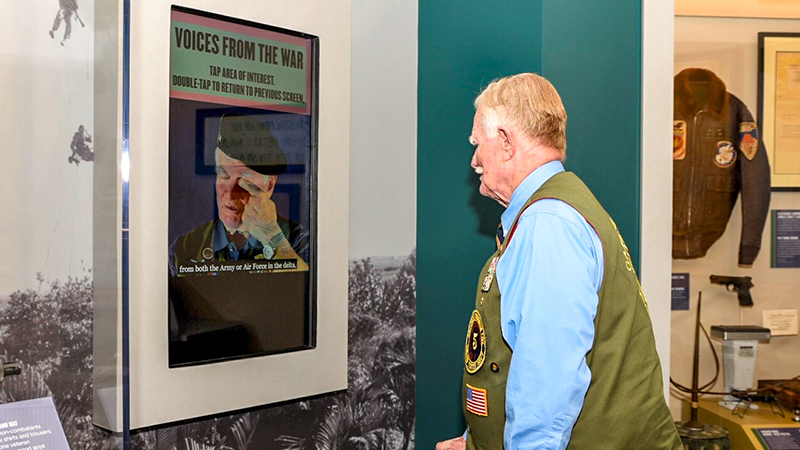 The craft paper and closed signs were peeled away on Oct. 9 to reveal the Hampton Roads Naval Museum’s new exhibit — “The Ten Thousand-Day War at Sea: the U.S. Navy in Vietnam, 1950-1975.”

But before the exhibit opened to the public, the museum in conjunction with the U.S. Fleet Forces Command and the Naval History and Heritage Command hosted an opening reception along with the Navy birthday. And yes there was cake.

Museum Director John Pentangelo provided some remarks and commented on the steadfast work that staff members completed to transform more than 4,700 square feet of their gallery into the new immersive exhibit. Admiral Christopher Grady, commander of U.S. Fleet Forces Command, echoed those remarks and provided some commentary on the Navy’s 244th birthday.

“The men and women of the United States Navy draw our inspiration from the sailors who have gone before them,” he said. “To our Vietnam veterans here this evening, and to others who contributed but were not able to be here, I am excited to open this new exhibit, because we still have much to learn from you.”

The roll call and coining ceremony was met with a standing and resounding applause of the near 300 flag officers, VIPs and guests in attendance at a packed auditorium.

Among the attendees was Hayes resident Jim Leuci, a retired U.S. Navy master chief petty officer. Leuci enlisted in the Navy in 1974 and loaned a few uniforms for the exhibit.

“With all the veterans included [for oral histories], it adds a local touch,” he said.

Also in attendance was Hampton resident Martha Walker, curator of the Battleship Wisconsin and Buckroe Beach. She echoed the excitement of the new exhibit opening, noting that she “likes history to expand, not to contract and be erased. That’s what I feel about this exhibit being produced, and I think everyone is thrilled.”

The immersive exhibit brings more than 130 new artifacts to the museum’s gallery, and touches on elements of Naval Intelligence, Riverine Operations, logistics and support operations, Naval Aviation, and Surface Navy Operations. It incorporates the oral histories of 40 area U.S. Navy Vietnam War veterans throughout the exhibit while incorporating artifacts both large and small.