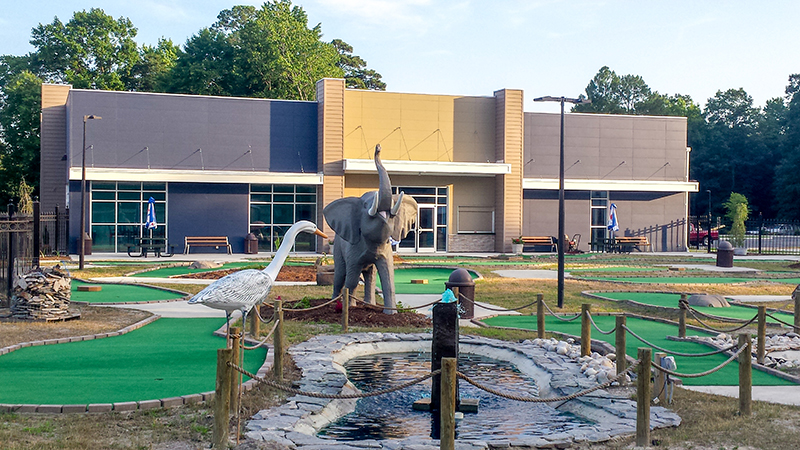 Wes Cowan has been playing mini-golf his entire life.

“When I was a kid, they used to have a ‘play all day’ rate,” said Cowan, who owns Play A Round Family Fun Center with his wife, Samantha. “My parents would drop me off at Putt Putt at 10 a.m. in the summer.” Cowan translated that passion for putt-putt into a lifelong career.

A 1987 graduate of Princess Anne High School, Cowan began working at Putt Putt in Virginia Beach in 1985. Since that time, he has traveled all over the East Coast to manage high-volume miniature golf courses and has also worked at the Putt Putt headquarters in Winston-Salem, N.C.

For folks of a certain age, the term miniature golf conjures images of vacations, family time and fun. For today’s technologically connected teenager, however, you have to bring a lot more to the table to capture their interest. Play A Round Family Fun Center endeavors to do just that by combining a state-of-the-art miniature golf course with an extensive arcade of games as well as laser tag.

“I think miniature golf is essential to our business,” said Cowan. “It’s the common glue that hold us together.”

Cowan chose York County for practical reasons. Land is more plentiful, and there is no amusement tax or admissions tax. Plus, it’s only a couple of miles from his home, which allows him to spend his scarce free time with his family.

“On occasion, my wife and I will play miniature golf on date night,” he said.

Designing a family fun center from scratch is a daunting task, and Cowan sought out the help of professional firms to help make his dream a reality. Having worked at so many different locations, he did have some specific ideas about how to create the perfect fun center.

“I had an idea that I knew in my heart would work,” he said.

Having a modern facility with birthday rooms large enough to accommodate up to 16 guests is part of that vision. Plus, the laser tag allows Cowan to truly be a year-round facility. They are open 363 days a year with specials for days with no school in session.

“When it’s 30 degrees outside, it’s really tough to convince people to play miniature golf,” he said.

Cowan’s staff plays a big role in ensuring birthday parties are fun for all. He employs mostly young people, and his “birthday hosts” are trained extensively before they tackle hosting a party on their own.

“We’ve got a really good group of young people,” he said of his staff. “We’ve had really good luck here.”