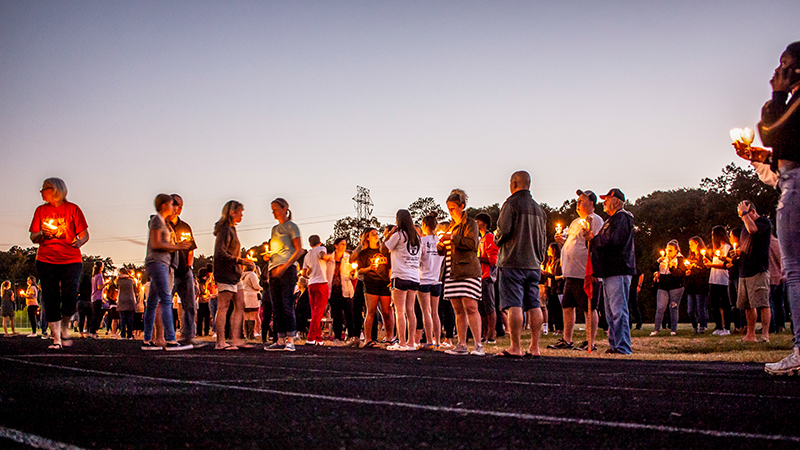 More than 1,000 people came together at Tabb High School on Sunday, Oct. 27, to mourn three Tabb students who died in a crash. (Troy Cooper photo)

The entire community came together this weekend to mourn with a grief-stricken Tabb High School after three of its students died in a tragic crash the evening of the school’s homecoming dance.

Virginia State Police reported the single-vehicle crash happened at 10:30 p.m. Saturday, Oct. 26, in the 800 block of Yorktown Road, just a short distance from the school.

The three 16-year-old students, all males, were in the 2015 BMW 325i when it went off the roadway, struck a tree and overturned, State Police said. The driver died immediately, and the two passengers also died from their injuries. All three were wearing their seatbelts. The students’ names have not been publicly released.

Support at a candlelight vigil the following evening at the school was so strong that organizers ran out of candles well before the event started. The school parking lot filled, and the lot of Bethel Baptist Church next door was filled soon after.

Most people wore their Tabb Tigers shirts. The support from the entire community was noticeable, as many students wearing gear from Grafton, York and Poquoson, as well as from other schools, were seen in the crowd.

The crowd of more than 1,000 gathered into a half-moon shape on the track and the football field and listened to a few speakers. One of them shared Romans 8:38-29: “For I am persuaded, that neither death, nor life, nor angels, nor principalities, nor powers, nor things present, nor things to come, nor height, nor depth, nor any other creature, shall be able to separate us from the love of God, which is in Christ Jesus our Lord.”

They lifted their candles high and walked the track around the football field while talking, hugging and shedding tears. Near the end of the ceremony, someone allowed the orange star balloons they had brought to float toward the sky.

On Monday, additional staff were in place at the school to support students and staff, said division spokeswoman Katherine Goff. The students gathered in the memory of their departed classmates on Monday morning, the school posted on its Facebook page.

“Tabb High School would like to thank our community for the overwhelming support of our school, staff and students following the tragic car accident that took the lives of three Tabb High students,” the school posted. “During difficult times like this, we must be prepared to care for and support each other as we deal with the many feelings that we are experiencing. As a school and a community, we are grieving. Your tremendous response underscores the compassion we have for one another and provides comfort as we begin the healing process.”

The school punctuated its message with the hashtag #weRtabbstrong.

Division Superintendent Dr. Victor Shandor said in a statement, “I am terribly saddened by the loss of these three young men. On behalf of everyone here in the York County School Division and our community, I want to express our heartfelt sympathies for the families affected by this tragedy. Division staff are working closely with Mr. (Paul) Rice and school administrators to provide support and resources for our students, staff and school community.”