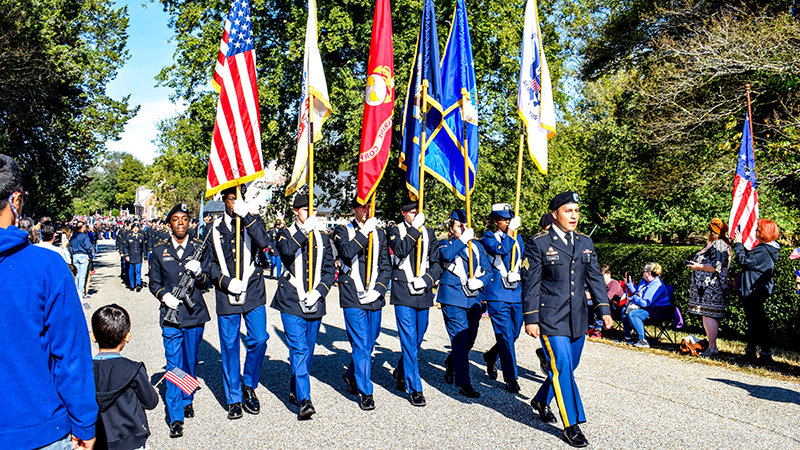 It was another picturesque and patriotic celebration of Yorktown Day on Oct. 19.

Yorktown Day commemorates the Oct. 19, 1781, surrender by Lord Cornwallis’ British and German troops to Gen. George Washington’s Allied American and French troops in Yorktown. This is considered the day America won its independence.

Following the parade, the “Parade of Flags” was held at the Monument to Alliance and Victory featuring the Color Guard of the 3rd United States Infantry (The Old Guard) and the Continental Color Guard from Fort Myer and flags from the organizations that make up Yorktown Day Association.

Guests heard greetings from Francois Penguilly, Consul General of France in Washington, D.C.; and David Bernhardt, Secretary of the U.S. Department of the Interior. The keynote address was given by J. Michael Moore, curator, Lee Hall Mansion and Endview Plantation.

This year she oversaw World War II re-enactors marching in the parade on behalf of the Museum and the Yorktown Association and then later at a Vietnam veterans’ pinning program sponsored by the USS Yorktown (CG-48) Association. The York County Historical Museum featured a special exhibit from the association, as well.

Wandering through everything Yorktown Day 2019 had to offer, visitors may have had a chance to meet Rose Marie Isgrigg, a direct descendent of George Washington, dressed in period costume and visiting from Albany, Ohio.

“I am hoping to pose for a photograph with the George Washington re-enactor who is here today,” she said.