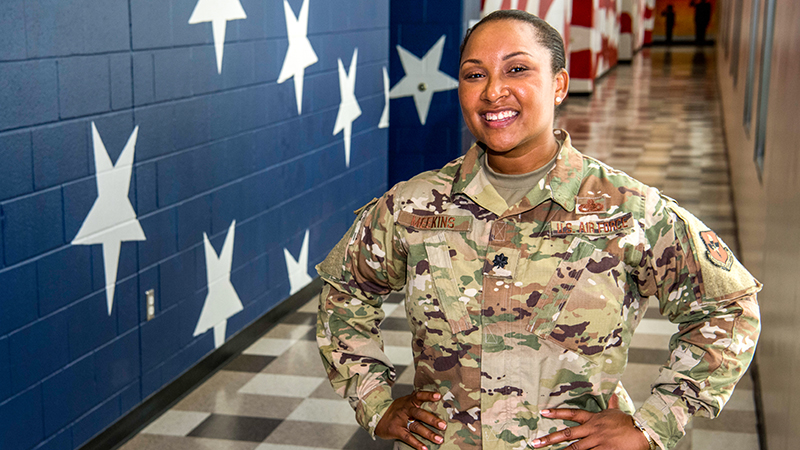 Lt. Col. Jeurney Meekins, 321 st Training Squadron former commander, poses in front of a mural of the American flag July 17, 2019, at Joint Base San Antonio-Lackland, Texas. The flag was the first in a series of murals painted at the 321 st TRS with the goal of inspiring, giving tribute to Air Force heritage, building teamwork, and leaving a legacy. (U.S. Air Force photo by Staff Sgt. Krystal Wright)

Red and white stripes followed by stars painted on a blue background stretch across the length of an entire corridor. Helicopter silhouettes in an evening scene are painted at the corner of a hallway, while silhouettes of fighter jets launching towards the sky decorate another. Along another corridor is an image of cybersecurity specialists at work, and around the corner is a picture of security forces members standing with a military working dog.

Trainees with the 321st Training Squadron volunteered to paint a series of murals through the unit at Joint Base San Antonio-Lackland in Texas. Among them was Lt. Col. Jeurney Meekins, former 321st TRS commander.

The project started July 4, 2017, with the American flag painted across the hallway of several classrooms. It took about 2 ½ months and about 12 gallons of paint.

“The trainees were really excited for the 4th of July and kept asking what they were going to do, so I said ‘we’re going to paint a flag,’” said Meekins. “Before I said that, I hadn’t actually gone to look at the hallway to figure out how long it was going to take.”

The mural project then evolved and expanded with the enthusiasm of the trainees into a two-year project.

“They loved it,” Meekins said, and not only facilitated the project, but also assisted with the designs and helped paint the mural. “They were happy to put something on the wall that inspires other people and themselves. They said it was very stress relieving, but also a lasting mark they would be happy to see years from now.

“Other trainees got excited with what they were seeing on the walls and wanted to contribute,” she continued. “It was weird having just one long giant flag on that one long hallway, and I had so many teams that wanted to paint that we decided to make it a more structured project.”

The next mural project was of accurately rendered medals in the atrium in honor of Chief Master Sgt. Duane Hackney, a pararescueman who earned more than 50 medals during his career and was the namesake of the airman training complex. The project took almost eight months to complete.

Hackney is heralded as one of the most decorated enlisted airmen in U.S. Air Force history. The atrium honors his legacy by displaying specifically selected medals that are to educate and inspire, according to the plaque displayed in the atrium.

Afterwards, the project further expanded throughout the unit to the hallways, stairways and dormitories. The illustrations varied in size; some filled a wall, others the length of a pillar or dorm’s entryway.

“I really wanted to tap into Air Force heritage, history and really highlight as many career fields as I could,” Meekins said. “It has been a very educational project, not just for the trainees, but for the staff and visitors as well.”

While trainees designed the majority of the artworks, some were based off of pictures. One such mural was based on a historical photo from the Berlin Airlift. Others included renderings of aircraft, portraits and military members completing the mission.

“It is good for trainees to see these murals, (because it) piques their interest in history and what this stuff stands for,” said Tech. Sgt. Brittany Skyles, 321st TRS military training instructor. “They are more intrigued to look up the history of these things they are painting, whether it be an aircraft, a person or medal.”

In addition to honoring the past, it also provided to the opportunity for trainees to leave a legacy of their own. Leaving art and motivational messages in the dorms for other trainees is a tradition within basic military training.

“Even 30 years ago, they were painting murals, quotes and stuff in the old dorms,” Skyles said, who recalled that her flight did the same 11 years ago. “It is important because they are stressed out and it is a way for them to get their minds back where it needs to be and to focus.”

Creating murals are not just a tradition within basic training but also across the military.

“Even in deployed locations, people do murals to pay tribute,” Skyles said. “There are murals everywhere and I think it is an outlet for everybody. It also shows that ‘we were here’ and what we represent.”

In addition to beautifying barriers downrange, military members also leave their mark in other artistic ways, such as painting nose and tail art on aircraft they maintain.

Everyone has a way to destress; for some it’s physical training while for others it may be church and there are some who need a creative outlet. Having those different ways to manage stress in a healthy manner helps them build their resiliency, Skyles said.

Building resiliency, fitness and fortitude are the goals of Comprehensive Airmen Fitness, or CAF, which is accomplished through the strengthening of the four pillars of wellness. The pillars are mental, spiritual, physical and social. The murals not only tie into mental well being, but also social, as they require teamwork.

Teaching trainees about CAF and different outlets to help them improve resiliency is part of MTIs’ responsibilities, Skyles explained.

“Some of the people who got involved didn’t picture themselves as an artistic person, but they did it to help and realized it was kind of therapeutic and felt good,” she added. “They liked how rewarding it felt.”

“They said the murals inspired them when they were having a gloomy day; they would see something that made them smile and reminded them to keep getting up,” Meekins said.

Meekins, Skyler and the other MTIs hope that both current and future trainees are able to take away valuable lessons from the project such as teamwork, stress management, resiliency, Air Force heritage, pride and motivation.