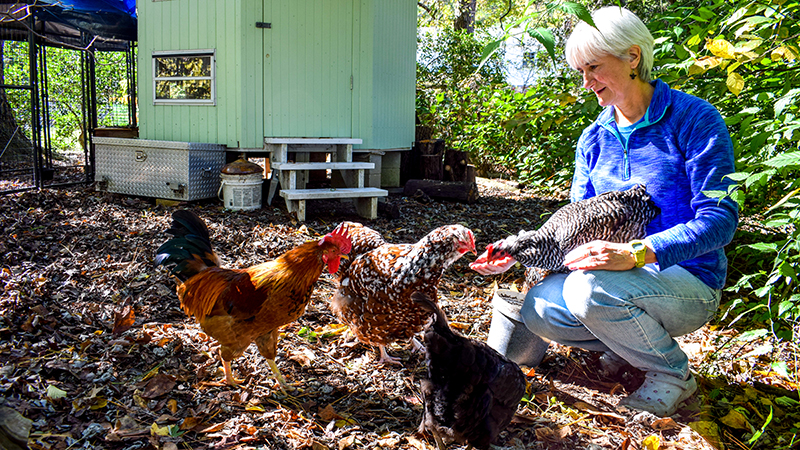 “I like chickens! To me, they’re pets,” Maryland native Carol Bartram said. “Like a lot of people, I started thinking eggs were going to be a benefit. They are, but now I’m much more interested in their personalities.”

Carol earned a Master of Occupational Therapy from Medical College of Virginia and worked in the Hampton and Portsmouth school systems as an occupational therapist before retiring. She is a York/Poquoson Master Gardener, and a Peninsula Tree Steward. Her husband, Scott, is an engineering technician at NASA.

The Bartrams bought their first chicks online in 2008. They were Poppy, Iris, Violet and Chicory.

“We were going for a flower theme then,” she said.

“I joined Facebook to put my beak on the pulse of the chicken world,” she said. “There are at least 10 local chicken groups there just in Hampton Roads.”

She developed the page to help people find their website, which shares resources and helps out.

“Frequently, someone posts, ‘Where can I find a vet that sees chickens?’ I point them to our website,” she said.

“She keeps books and supplies for chick rearing people can sign out,” said Laura Burbage, PeCK member and 20-year chicken owner. “I was able to check out a chick warmer from Carol, which saved a lot of money.”

“They’re like dogs,” Carol said. “When Scott comes home to the gate at 3:30 they’re waiting there. He gets an apple and feeds them little pieces.”

The Bartrams’ backyard provides shade and shrubs to deter birds of prey. Chickens like to eat grass, clover and Chickweed, so they work to propagate them. They also cultivate black soldier fly larvae for the chickens.

Caring for chickens has changed the way Carol experiences the world.

“They get me out in the yard more,” she said. “After letting them out at sunup, I bring my coffee and paper and sit on the swing where the chickens sit on my lap.”

The Bartrams are diligent about putting the chickens up at night in their secure henhouse Scott built.

“We have to be right on it to close the chicken door when they go to bed and pick up the food so we don’t attract raccoons and possums,” she explains. “Chickens are vulnerable at night.”

Carol advises chicken owners to be cautious when introducing new chickens to their yard.

“We’ve had chickens that don’t get along, so we separate them,” she said.

She’s found her occupational therapy experience useful in caring for her chickens.

“In OT, you learn a lot about nonverbal communication and environmental adaptation,” she said. “I figured out how to get a sick chicken in the coop.”

Carol has also learned to listen to the wild birds in the area.

“I’ve noticed the chickens paying attention to something, and tune into the sounds of chickadees or titmice,” she said. “They hear birds warning of danger and call to each other if separated.”

She enjoys introducing her chickens to people.

“They say, ‘I didn’t know they were so beautiful, tame or smart,’” Carol said.

“I’ll teach a class where somebody realizes that chickens are not for them,” she said.

In her work with PeCK, the hardest thing has been roosters because they are not allowed in a lot of localities. If they are, it’s not recommended to keep more than one rooster for eight to 10 hens.

“There just aren’t enough places for roosters to go, and our group is trying to do a better job at educating people on how to avoid getting accidental roosters,” she explains.

After learning that commercial hatcheries dispose of the vast majority of male chicks, the Bartrams only adopt chickens now.

“Carol and Scott are truly advocates for chickens and chicken keepers and are always willing to take time to help,” said Roger Iles, manager of the Peninsula Regional Animal Shelter. “Carol has been an invaluable resource for us in finding suitable homes for these birds by using her network of chicken people statewide.”

Knowing the chickens’ wild ancestors are the red jungle fowl, the Bartrams are trying to reproduce a jungle in their backyard by cultivating shrubs such as Goldenrod, Green Coneflower and Beautyberry. They have repurposed a friend’s old satellite dish by growing varieties of sedum on the upturned dish, simulating the look of a thatched roof over a protected area for the chickens to feed, water and get out of the sun.