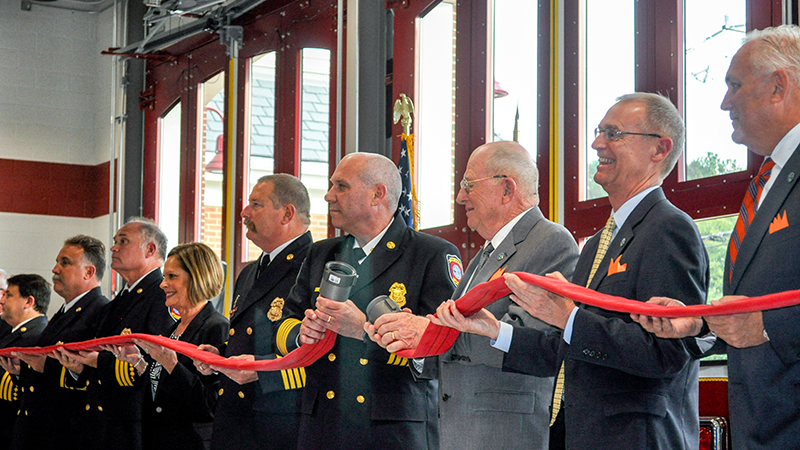 County and Department of Fire & Life Safety officials uncouple the hose at the dedication of the new Fire Station 1 on Oct. 29.

York County celebrated the opening of its newest fire station with a ceremonial “hose uncoupling” on Oct. 29.

The new fire station on Dare Road replaces the county’s original fire station that is approaching 60 years in age. The ceremony was attended by more than 100 key county staff, fire and rescue personnel and members of the principal architectural and construction firms.

“This ceremony culminates many years of anticipation and need for the replacement of Fire Station 1,” said York County Department of Fire & Life Safety Chief Steve Kopczynski.

The new fire station has been under construction since its groundbreaking in May 2018, but the project has been ongoing for much longer than that.

“Making this a successful project probably really took a decade going back to the site selection process,” County Administrator Neil Morgan said at the dedication ceremony. “There was hardly any function of county government that did not support successful completion of this project, and I want to thank you all.”

Chairman of the Board of Supervisors Tom Shepperd said the new fire station is the result of a lot of hard work.

“Here before us stands an example of excellent financial planning and investment in our infrastructure, and it is a project I am very proud of,” Shepperd said. “For many years, my fellow board members and I have made public safety number one of our top priorities. The Board of Supervisors works closely with the county administrator to ensure that we have appropriate funding and a solid plan in place to support and, as needed, to expand the service.”

The county’s first fire station was built by dedicated community members on Route 17. But at almost 60 years old, it was outdated, had increasing maintenance challenges and no longer offered modern capabilities for fire and rescue services.

The new fire station features a larger apparatus bay and bay doors that open faster, helping the county meet its goal of a five-minute response time to calls. The station also features improved training areas and a more efficient hallway network so that personnel can quickly access the emergency vehicles, and better personnel areas for crew at their “home away from home.”

The fire station also features a number of historical photos to pay homage to the history of the fire service in York County.

Morgan stated at the dedication ceremony that the new fire station is evidence of the board’s commitment to replacing aging infrastructure.

“One of the challenges we face in York County is that our public facilities are aging faster than we’re renovating them and replacing them,” he said. “With the Board of Supervisors’ support, that’s a challenge we’ve undertaken to rectify.

“There’s more to come in the future,” he added. “I appreciate the board’s continued focus on what the long-term needs of the county must be.”

“It’s a shining star in the 4th District. It certainly is our neighborhood fire department.”

The station will continue to serve as the district fire station for the southeastern portion of York County, including Grafton, Dare and surrounding areas and subdivisions. The station will provide primary backup response to the areas covered by the Tabb, Yorktown and Seaford fire stations.

“This facility and the assigned personnel will ensure effective fire and rescue operations to its primary response areas as well as surrounding fire station districts now and for many years to come in the future,” Kopczynski said.