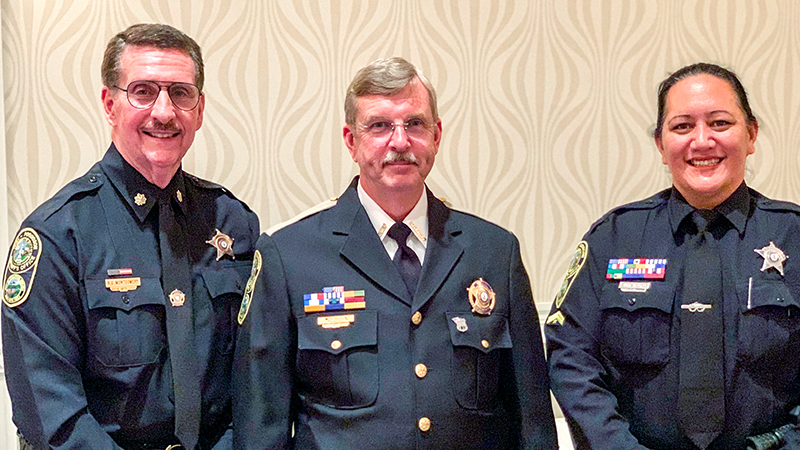 Two members of the York-Poquoson Sheriff’s Office were honored by the Greater Hampton Roads Regional Crime Lines on Oct. 12 at the Portsmouth Renaissance Hotel in Portsmouth.

Maj. Ron Montgomery received a standing ovation when he was honored with the Lifetime Achievement Award, and Master Deputy Shawn Kekoa-Dearhart was the Top Cop honoree from York-Poquoson Sheriff’s Office.

Montgomery has been with the office for nearly 45 years and made light of his long career during the ceremony.

“Maybe that’s what the achievement was for — being here a lifetime,” he joked.

Montgomery grew up in a police family but didn’t feel a particular pull toward law enforcement, he said.

“My father was a police officer in Williamsburg when I was growing up, so I was around police officers my entire life, it seems like,” he said.

That all changed when one of his dad’s friends, the late Darrell Warren, was visiting and invited him to go on a ride-along that evening.

“I don’t remember any particularly thrilling calls, but by the time the evening was over, it was in my blood,” Montgomery said. “My mother wouldn’t speak to Darrell Warren for a couple years after that.”

Montgomery started off working in the jail under Sheriff A.S. White.

Montgomery progressed through the ranks, making investigator in 1979 and captain of investigations in 1983. He held that rank until Sheriff J.D. “Danny” Diggs promoted him in 2000 to major and chief deputy.

“The time I spent in investigations from ’79 to 2000, I really enjoyed that time the most,” Montgomery said.

One of his most memorable cases happened in 1990, when local businessman Jimmy Johnson was abducted and murdered trying to sell his Mercedes. The case was unsolved for more than three years until “America’s Most Wanted” profiled it. Montgomery said it was the first time they had done a story without already having warrants against a particular suspect.

Soon after the story aired, live television cameras followed Montgomery into the Newport News apartment of Juannito Edwards, where Montgomery arrested Edwards for the murder.

Montgomery said he has no plans to retire and wants to stick around at least long enough to see one more project through — the construction of the new building that will house the Sheriff’s Office.

He said he is grateful for the award he was given.

“I was humbled by it,” he said. “I’m grateful for the sheriff to nominate me for it, but I’ve still got work to do. I love this job, and I can’t imagine doing anything else.”

Kekoa-Dearhart has been with the agency for a little more than 12 years. She worked in law enforcement first at Hampton Roads Regional Jail and then at Middle Peninsula Security Center.

In her service at York-Poquoson Sheriff’s Office, she has served in a number of capacities including crime prevention and as assistant team leader for the crisis negotiations team, as well as an instructor on numerous topics including arrest techniques.

She said she got into law enforcement as a way to help people.

“I wanted the ability to go into a career that I could help people,” she said. “You have to have the desire to help someone.”

Kekoa-Dearhart has devoted much of her time to the “Every 15 Minutes” program in local high schools, which teaches the teens about the dangers of drunken and distracted driving.

She also serves as a rape aggression defense instructor. She has taught many members of the community over the years including numerous victims of rape, sexual assault and robbery who feel more empowered as a result of the class.

She said she was “really surprised and humbled” by the award.

“It’s nice to be recognized, but that’s not the reason I do it,” she said.

She and her husband, Chris, have a daughter and son who are both students at Radford University.