Poquoson Diner: Where everybody knows your name 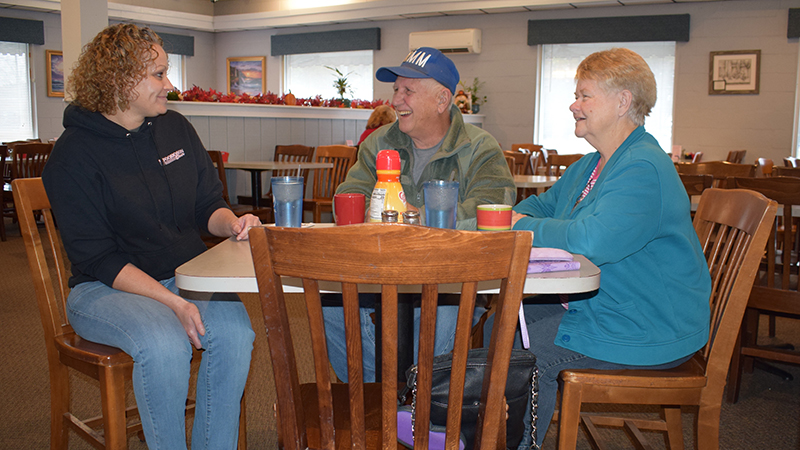 “Poquoson is a different breed of people,” said Tamra Hogge, owner of Poquoson Diner. “Where I came from in New Jersey, it was just like this ,where everybody says ‘hi.’ I call this Happy Town.”

Born in Poquoson and raised in Cape May, N.J., Tamra Hogge is the owner of Poquoson Diner.

The oldest of eight children, Hogge’s dad had a construction company. She returned to Poquoson at 16 after her grandfather died and moved in with her grandmother.

“My grandma helped me raise my kids,” she says of her three children including her daughter and 11- and 16-year-old sons. “She was amazing, and I was blessed to have her.

As a single mom, Tamra worked at Anna’s in Buckroe when her daughter, Bryana, was a toddler.

“I’d take her with me,” Hogge says. “She passed out menus and got more tips than me some days.”

Jim Warren, owner of James E. Warren and Associates Booking, originally bought the diner for his son, but it wasn’t doing well. He asked Hogge, his waitress at another local restaurant, to help him out once a week. After a few months, she told him he should close down. In 2012, he asked her to quit her three jobs to work for him exclusively.

“He became a dad to me and changed my entire life,” she says. “I ran it for him for five years and purchased it in June 2018.”

Bryana graduated last year and is now manager of Poquoson Diner, where she’s worked since she was 14. They have 18 employees, most of which are long-term.

“When I took over here, I looked online at New Jersey diners and grabbed specials off their menus to offer here,” she said.

“We have the same people every day, sometimes twice a day,” she said. “They’re like family. The guys who sit at the bar know how to bus tables and roll silverware. I can’t ask for nicer customers.”

When somebody calls in sick, Hogge can be the dishwasher, cook, waitress or plumber — whatever is needed.

“I work 80 hours a week, and I’ve got my dream,” Hogge said, proud of her accomplishments. “I’ve worked hard my whole life praying to God that somebody would see me and say, ‘This girl’s a worker.’”

Thanksgiving night, Poquoson Diner employees decorate their Christmas tree to help Able are Us. Like an Angel Tree, customers look forward to choosing an “ornament” from the tree with a list of Christmas presents for disabled adults without families.

“They have Down syndrome, autism, etc.,” Hogge said. “When my friend, Jane Hobbs, who runs the nonprofit, found out I owned the diner, she asked me to help. I’m so passionate about this.”

As this is all they will receive for Christmas, Hogge sees to it that no one is left out.

“We get 30 names, and towards the end there are five or six left,” she said. “I have to cover them, because that’s all they’re going to get for Christmas.”

Poquoson Diner features karaoke on the third Thursday of each month.

“We have lots of Patsy Cline and a man dressed like Elvis,” Hogge said. “For many, this is their night out on the town, and they come in all dressed up.”

“I think of Tamra as one of my kids,” server Trudy Rollins said. “There’s nothing she wouldn’t do to help you.”

“By far, this is our favorite place to eat,” said David Watkins, who eats at restaurants from Virginia Beach to Williamsburg with friend Glenda Williamson. “Everything is out of this world.”

“I love the staff and the food,” Williamson said. “That’s what keeps bringing us back. It’s like the ‘Cheers’ thing: Where everybody knows your name.”