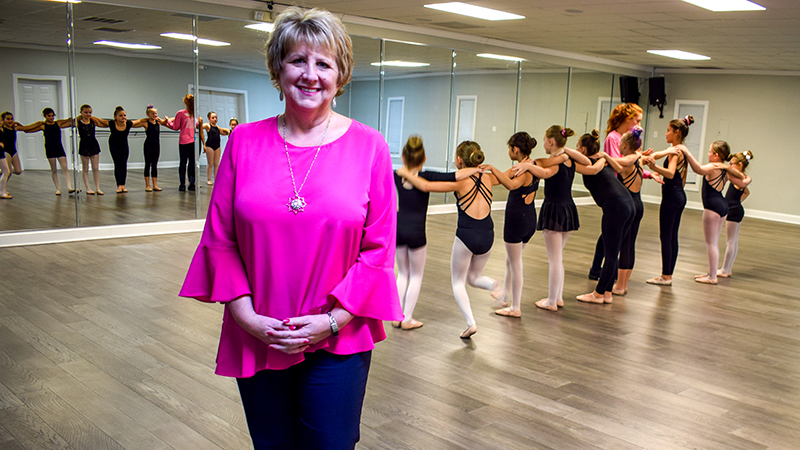 Terri Fisher Moore opened Poquoson Dance Academy in 2000 to share her love of dance with local children. When she passed away suddenly in 2001, her mother, Jeanne Fisher, graciously took over the studio in her memory. She ran it for 12 years until her commute from Norfolk became increasingly difficult with age.

In 2013, knowing the Fishers wouldn’t be able to continue running the studio much longer, Denise Topping (whose daughter, Abby, began dance instruction at the school at 5 as one of Moore’s first students) offered to manage or purchase the academy. Fisher sold the academy to Topping, whose mother, Florence Martin, helped with the purchase.

Topping earned her Bachelor of Science in Business Administration from Longwood University and married Warren, an original Bull Islander. Today she is a full-time marketer with Advex, a machining fabrication company near Langley, in addition to running the academy in the evening.

Abby, now 23, is a clinical technician for Hampton Roads Eye Associates. Their son Jake, 21, is a machinist for Master Machine and Tool.

After her childhood of relocating with her stepfather’s military career — from Germany to Massachusetts to Poquoson — Topping had a dream for her children.

“I wanted to give my kids the opportunity to stay in a school and know the people they went to school with,” Topping said of her motivation for taking over the academy and giving her kids a sense of place.

She also wanted Abby to finish her senior year at the same studio she had been at since she was 5.

“After that, I would see where it went,” Topping says. “I fell in love with all the dancers and their families.”

The academy is open from 4 to 9 p.m. Dance students take classes earlier in the evening, and the adult Barre and Zumba classes are offered later. The school has four dance teachers, including co-directors of their dance competition team, Abby and Laura Bransford, who was another of Moore’s original students.

“Teaching gives me the chance to inspire and encourage dancers to love dance as much as I do,” Abby said.

For adults, they employ a Zumba and a Barre instructor.

In its 20th year, the dance school moved to a larger location to expand the classes they offer and teach more dancers — what Terri sought to do two decades ago. A dance mom helped the school find its new space, which opened at 374B Wythe Creek Road in November. The academy’s competition dance parents helped with renovations, especially painting and laying down the dance floor.

The competition team has 27 girls.

“Those are the parents I know best.” Topping said. “I know the parents of our other students well, too, because many have been coming over five years.”

Poquoson Dance Academy is not all girls. There is one boy who takes tap instruction and one boy learning hip hop. Students range from 3-year-olds in creative movement class up to high school seniors.

“Ages 3 to 4 we to make it a fun class, because you can’t get too ballet basic with them,” Topping said. “We teach them the positions and terminology, but we try to make it fun too.”

Their reception area offers a large screen monitor so parents can watch their students in class.

“Having my new students come, watching them in dance class and then seeing how much they’ve progressed at their year-end recital,” is Topping’s greatest satisfaction, she said. “It’s amazing.”

The academy participated in the Poquoson Christmas Parade, the Poquoson Seafood Festival and will be returning to dance in local nursing homes.

“If you are looking for a place for your child to grow a love of dance, teamwork and great sportsmanship, then you should definitely check it out,” dance mom Heather Gauthier said. “The owner and teachers are so invested in the kids, and it is truly a family.”