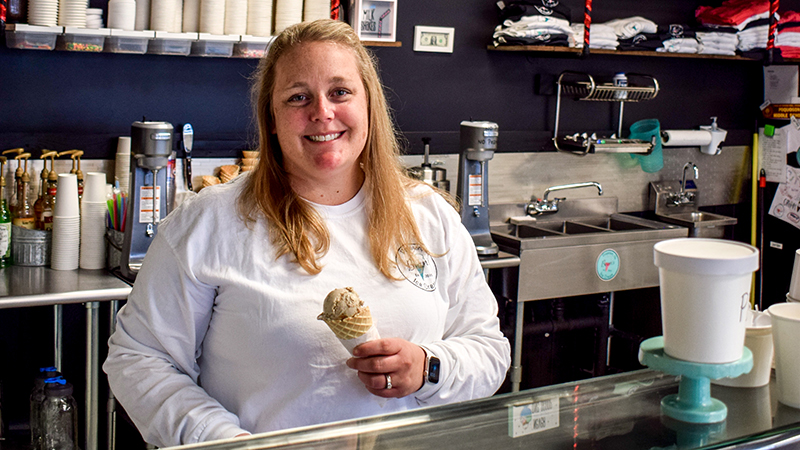 Born in England, Jenna Horning grew up in Virginia Beach. She earned her Bachelor of Science in business marketing in 2007 from Old Dominion University. She married childhood sweetheart, Aaron, a contract aerospace engineer with NASA. The couple has three daughters: Teagan, 12, Hayden, 10, and Lily Bella, 8. They also have two dogs, three cats, three goats, a chicken and three hamsters.

After years of working as an assistant to several Virginia Beach business owners, then in the office at Poquoson Primary School, Horning decided to utilize the marketing business plan she developed when first relocating to Poquoson in 2014.

“In April, I was ready for a change,” Horning said. “I signed the lease on the shop on June 6 to open July 4.”

It was important, as an ice cream shop, to open in July, so Aaron worked nights to reimagine the shop for 29 days.

When Teagan was 10 months old, her pediatrician suggested feeding her foods packed with protein, like peanut butter. The first time, Teagan reacted with hives.

“Since then, we’ve had allergy awareness in our lives,” Horning said. “With younger kids, you’re hyper-vigilant and don’t go to ice cream shops — especially hand-dipped.”

Begun with the purpose of making things safe for her daughter, Bean’s is now a totally allergy-friendly facility with well-trained staff. They cater to customers with gluten allergies and celiac disease.

Bean’s offers only six ice creams labeled as possibly containing nuts. For these, they have a separate dip well and separate blue-handled scoopers. The shop’s other 18 to 24 flavors have a different dip well with green-handled scoopers. Bean’s serves two dairy-free sorbets dipped with a separate sanitized scoop.

Bean’s also caters to customers who have a dairy allergy, because so many families have members with different allergies.

Horning credits her success to community support from her employees, their parents, friends, local schools and businesses.

Horning, an avid volunteer, enjoys using Bean’s as an outlet for volunteering. They have a program to promote positive behavior at school by rewarding free scoops to students. Bean’s Ice Cream Shop supports local athletics and other nonprofits like Peninsula Animal Welfare Sanctuary. At her recent parents’ night out Polar Express event, the kids did a service project for two retirement communities.

“I want to organize a group of kids to meet here before we open to do a monthly service project,” she says.

Horning’s greatest satisfaction is seeing children come in who haven’t been able to eat a dipped ice cream before.

“They come in and say, ‘I have a peanut allergy,’ and my staff change and move things,” Horning says. “The staff takes ownership like it’s their own sibling.”

“When my son was younger, he had severe food allergies and our opportunities for a sweet treat were limited. I wish Bean’s was around then so our family could have enjoyed a night out in an allergy-safe environment,” said Wendy Green.

“One kiddo was peanut allergic so the two families could eat here safely,” she said of a group of campers who stopped in.

“I think my mom’s job at the ice cream shop is so cool,” Teagan said. “I like how I don’t have to worry about peanut contamination and can choose an ice cream that is safe for me.”