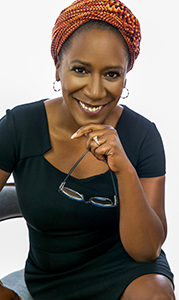 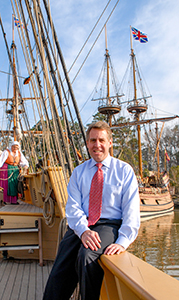 Philip G. Emerson will retire at the end of December as the executive director of the Jamestown-Yorktown Foundation after 33 years with the organization. (submitted photo)

After a landmark year, the Jamestown-Yorktown Foundation will embark on a new era in January with a momentous change in leadership.

The state agency has had significant recent successes, including the opening of the new American Revolution Museum at Yorktown, the refresh of the exhibit galleries at Jamestown Settlement and the 2019 Commemoration, “American Evolution,” that brought national and international attention to Jamestown’s major legacies.

With the 250th anniversary of the American Revolution just a few years away, JYF’s Yorktown museum and Revolution-related programming will soon be in the national limelight as well.

The agency grew in many directions during Emerson’s 33 years with the foundation, including 28 years as only its third executive director in its 62-year history. He came in 1986 after roles at the Mariner’s Museum in Newport News, the Virginia Tourism Council and Luray Caverns.

Emerson recently reflected on his career and the many ways it had changed over the years.

“We compete for leisure time and resources, so we need to ensure our customers and students feel like they are having a positive, engaging experience and receive value for their admission ticket,” he said.

“The museums today in 2019 are very different from even three decades ago or even two decades ago,” he said. “We continue to update our offerings as we learn more about the history but also new technology and ways to present those.”

He has welcomed four U.S. presidents as well as Her Majesty Queen Elizabeth II and His Royal Highness The Prince Philip, Duke of Edinburgh, among others.

Most importantly to the next generation, educational programming has grown in Emerson’s tenure. Last year, about 200,000 students visited the sites, and outreach programs served about 86,000 more in at least 105 school districts across the state in their home districts, helping bring the story of the nation’s beginnings to students that were not able to visit the Tidewater area due to lack of funding or other issues.

“Every day, our staff works very hard to provide an excellent and engaging educational experience,” Emerson said. “The Jamestown-Yorktown Foundation has been extremely fortunate to be supported by strong boards, a dedicated paid and volunteer workforce, many donors and also engaged partners.”

He added that 70 percent of visitors and 50 percent of students coming to the sites are from outside Virginia. “Clearly we are enhancing the area and the state’s economy,” he said.

Emerson said it will be very difficult to leave after 33 years. He plans to stay involved in the community with Kiwanis, Williamsburg United Methodist Church, the Chamber of Commerce and on the Randolph-Macon College Society of Alumni.

“I look forward to watching from afar, and I know Christy will do an outstanding job,” he said.

Emerson’s successor, Coleman, is a native of Williamsburg and worked as a living history interpreter in the African-American programs unit at Colonial Williamsburg as a youngster.

Her first professional job was at Baltimore City Life Museums in the late 1980s. She then returned to Colonial Williamsburg and stayed until 1999, going through several reorganizations and taking on several roles of increasing responsibility.

In 1999, she left for Detroit to become the chief executive officer of the Charles H. Wright Museum of African American History, where she stayed for six years. She later worked at the American Civil War Center at Historic Tredegar.

Coleman said she aims to continue to draw visitors, diversify visitation and staffing, find opportunities for greater storytelling and help get the museums and their stories more known on a national stage.

“I think the smartest thing to do is dig a little deeper into what they are doing now,” she said. “The first year really is getting to know the guts of the organization in and out and looking for those opportunities.”

Coleman said she looks forward to forging her relationships with the museums’ partners, including the National Park Service and Preservation Virginia.

Coleman holds a master’s degree in museum studies from Hampton University and has been a member of numerous organizations, including the African American Association of Museums, the American Alliance of Museums and the Association for State and Local History, where she was also a Council member. TIME last year named her one of the 31 people changing the South.

Praise from Coleman came from far and wide after the announcement of her hiring.

“Christy Coleman’s professional accomplishments and perspective will be invaluable in writing the next chapter of JYF’s long and storied history, and we’re all looking forward to having her experience and creativity guiding the next generation of programming,” said House Speaker M. Kirkland “Kirk” Cox, chairman of the JYF Board of Trustees. “As a dynamic, proven leader in the museum field, she will help ensure that our programs and exhibits align with the educational needs of today’s young people and are relevant and appealing to the visiting public.”

Sen. Janet Howell, vice chairman of the JYF Board of Trustees, noted the history-making significance of Coleman’s appointment. “She is the first woman and the first person of color to hold this role, and we’re really looking forward to how she will use her unique experience to tell inclusive narratives on a global stage,” Howell said.

“Telling the many stories of early Virginia in a way that is not only innovative and engaging, but accurate and complete, will be a high priority for Christy Coleman,” predicted Chief Stephen R. Adkins Sr., of the Chickahominy Indian Tribe, a member of the search committee.