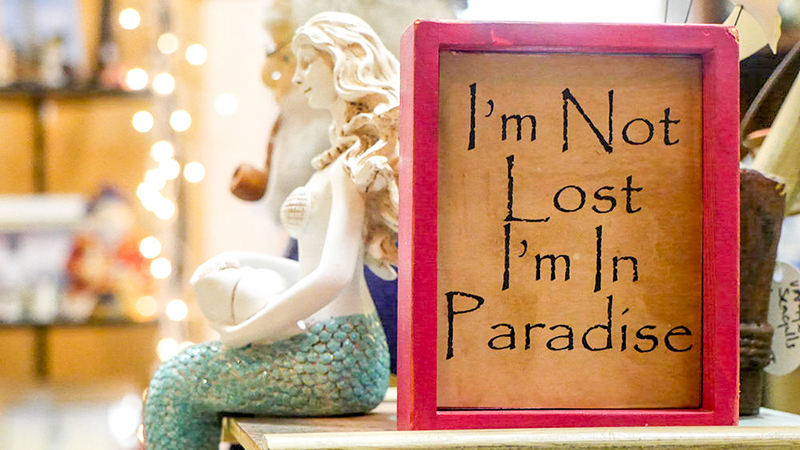 Taylor Hogge and Shanan LaFlam are cousins and the co-owners of Mattie’s Gifts on Route 17. It features all manner of antique, vintage and modern décor.

When they said everything old is new again, they must have known Taylor Hogge and Shanan LaFlam, cousins and co-owners of Mattie’s Gifts on Route 17. The eclectic shop showcases vintage items, like hand-cut crystal glassware, as well as new items, like a kitschy sign that insists, “I’m not lost, I’m in paradise.”

“We love old things,” said Hogge. In business for more than 10 years, both Hogge and LaFlam find their treasures in a variety of ways. LaFlam, characterized as the business head of the duo, does most of the buying of new items, to include a large selection of nautical-inspired décor. However, antiques and vintage items require more sleuthing.

“We never met an auction we didn’t like,” said Hogge.

Upon entering, patrons of Mattie’s are immediately offered tea — iced in the summer, hot in the winter. Hogge gets their supply of tea from an unlikely source — Israel.

She has been volunteering her time for the past 15 years or so, traveling to Israel for months at a time in order to teach and care for children at various levels of risk who are sent to youth villages there.

Often, families send their children to the villages due to financial hardship or other personal difficulties, and then join them at a later date. Hogge spends approximately three months at a time in the children’s village, making chicken soup on rusty hot plates and finding literature she feels will be interesting to the children in her care.

Hogge has cared for thousands of children over the years from locations all over the globe, and has stayed in contact with many of them now that they are adults.

“I have a houseful of Russians every Christmas,” she said. “I love it, because I don’t have kids.”

She used to carry suitcases full of tea home from each trip.

“Everyone loves it,” said Hogge. She also buys jewelry from an Arab supplier while she’s there, selling the unique pieces at Mattie’s.

The unique collection featured at Mattie’s can accommodate a variety of trends. One the cousins hope to capitalize on is the trend in events where dining pieces are mismatched and vintage. They even offer to rent pieces from their vast stores of champagne glasses, silverware and dishes.

Recently, a mother of a bride bought 300 champagne glasses for her daughter’s wedding. The glasses did not match, but she tied a ribbon around the stem of each one to unify the look.

“They were so envious of what she had done,” said Hogge of the wedding guests. “That’s the fun part for me.”

The overarching theme of the shop can be seen and felt throughout — seeing the value in things that endure, things that evoke a sense of family. Family can also be found in the name: Mattie was the cousins’ grandmother, and her 3-year-old self can be found in a photograph in the shop.

“She was a lovely little apple dumpling lady,” remembers Hogge. Mattie was a quintessential Southern lady, often getting up at 4 a.m. to bake a ham for someone’s funeral, according to Hogge.

Part of that genteel manner must have been transferred to the cousins, given their appreciation of fine things. Hogge hopes younger generations develop a similar appreciation.

“There are certain women who grew up with beautiful things, and they were impacted by it,” said Hogge.