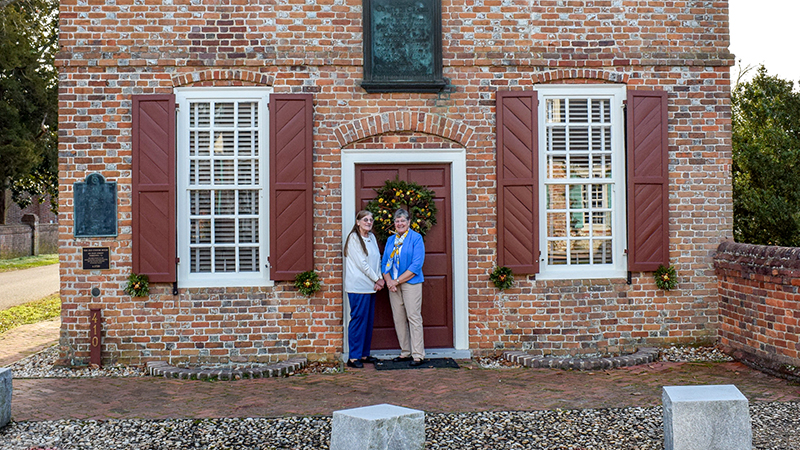 A private island of preserved history

“This is my heritage, and I knew historic preservation was a big deal,” said Jennifer Carver, today in her second term as regent of the Comte de Grasse Chapter of The National Society of Daughters of the American Revolution (NSDAR). “I’m a biology major, but between wooden boats and antiquing with my mother, I appreciate nice things.”

“There were custom houses in every coastal city,” said Pauline Reimold, chapter historian and docent chair. “Yorktown Custom House was the first building specifically used to collect customs and is on the National Registry of Historic Places.”

In 1716, prominent businessman Richard Ambler purchased lot 43 at the corner of Read and Main streets. He built a substantial warehouse in 1720.

In that day, there was a spacious front room and counting office on the first floor and open storage upstairs. Ambler was so busy, he needed to live closer than his Jamestown Island home. A door on the west side of the building led to a breezeway connecting a large framed house built for that purpose.

After Ambler’s death in 1766, his sons succeeded him as customs agents. The family moved back to Jamestown Island during the American Revolution, selling the property to Thomas Wyld. In the following years, the property was used by British and French troops wintering in town, and the Amblers reclaimed the house from an impoverished Wyld in 1783.

In 1862, Civil War Gen. J.B. Magruder headquartered at the Custom House. Ambler’s connected frame house was destroyed during that era.

In 1882, Dr. Daniel (Mc)Norton owned the Custom House, practiced medicine and represented the district in the Virginia Assembly. After his death in 1918, his family auctioned off the property to Captain and Adele Blow, who lived in the Nelson House next door. In 1924, Emma Leake Chenoweth lived in the Cole Digges House and in 1922 formed the Comte de Grasse Chapter named after Battle of Yorktown hero, Francois Joseph Paul, Marquis de Grasse-Tilly. She was the driving force behind the purchase of Yorktown Custom House. This facilitated the Comte de Grasse Chapter’s mission to reinforce the significance of historical Yorktown, preserve the landmark and educate the public.

“Many residents consider her to be the woman who saved Yorktown,” Carver said. “We are very proud of our Comte de Grasse, the admiral who stymied the British fleet.”

“I feel an obligation to it,” said Carver, who acknowledges she joined DAR because of the Custom House. “Our mission statement is ‘Proudly preserving the past so as to ensure the future.’ Members have opened the Custom House to the public since 1930 to share the history and significance of Yorktown.”

Yorktown Custom House opened as a museum in 1930. During the 1931 Sesquicentennial, other chapters without space to store their historical items donated them to the museum.

Comte de Grasse Chapter installed a museum in the downstairs front room to promote Yorktown’s significance. The spacious upstairs room serves as their chapter house, something unique in the DAR world. The building’s 15-inch-thick walls are original, as are most of the floors, doors and locks.

“We have a salt cellar George Washington used at Valley Forge, part of his wedding vest and a lock of hair,” Carver said.

“The Nelson Family donated a lot of stuff, too,” Reimold added.

The museum features Comte de Grasse’s watch, a portrait of his first wife and daughter donated by the de Grasse Family. They display items from Thomas Nelson, signer of The Declaration of Independence. The Nelson family donated their Bible, a spoon with their hallmark, a ball gown, Nelson’s father’s trunk containing two antique quilts, his clothing and a butler’s desk.

There are revolutionary area artifacts on display found during a French drain project and dry well dig — a doll’s head, a rusted knife, glassware, a bayonet, buttons and more.

“All the history I’ve learned, I learned in this building or outside its walls,” Carver said. “The walls sucked me in and are the reason I joined DAR.”

On daily walks with her dog, she took notice of the Flemish bond bricks of the property’s perimeter walls and building. William & Mary’s Wren Building and the University of Virginia’s rotunda feature the same brick.

Carver’s patriot is Elisha Williams, a delegate to the Maryland Constitution Convention and a justice of the peace. Each DAR member must be female and have a proven patriot ancestor who fought or gave aid during the American Revolutionary War. There are currently 190,000 living members in DAR overall and 196 members and 60 associates in the Comte de Grasse Chapter.

Carver is in her second term as regent due to her project goals. She ensured the electricity safety in the building, worked to install professional-grade central air conditioning and dehumidifiers, and continued to protect the floors by having a custom floorcloth — inspired by George Washington’s flag of medium blue with a six-pointed star — in the museum’s main room. Her ongoing goal is to revitalize museum exhibits.

Forty chapter docents take turns manning the museum on Sundays from 1 to 4 p.m., from Memorial Day weekend through Oct. 19.

”We are not government funded,” Reimold said. “You would be surprised how this information encourages visitors to donate.” Reimold’s patriot was Aaron Littlefield, a 17-year-old secret agent in Massachusetts. She joined the chapter in 2007 but has been in the DAR for 42 years.

The property also features a necessary, a kitchen house and a boxwood garden.

The Custom House features a pathway in back, and donors may purchase a brick for $100 to support the property’s preservation.

“As a resident interested in historic buildings my whole life, I am so appreciative of Mrs. Chenoweth and her efforts to save [Yorktown Custom House] from being lost,” Cole said.

“I believe you should be a part of where you are,” Carver says of her passion for serving in Yorktown. “The ladies spared no expense in the 1920s. We should do no less now, so Yorktown Custom House will be around another 300 years.”