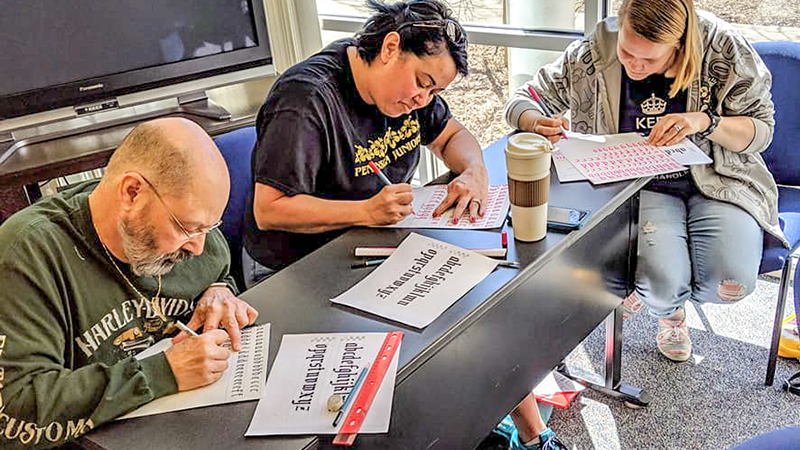 Participants in the Yorktown Calligraphy Guild work on their art at a recent meeting. (submitted photo)

When she was just 14 years old, Yorktown resident Mary Arndt witnessed the unimaginable.

It was 1985, and she and her 10-year-old sister had been sharing a bike as they traversed their neighborhood selling candy. Arndt had just taken her turn on the bike, and handed it off to her sister. She watched as a drunk driver hit her sister with his car, ending her life.

Prior to her sister’s death, Arndt had been an above-average student, but as she struggled to process her grief, she was failing nearly every class. A teacher reached out. He was of German descent and informed Arndt that he would teach her calligraphy. He seemed to think it would help, but Arndt was unconvinced.

Undeterred, her teacher recruited a few more students, and taught an intensive of sorts for the next three weeks, every day after school. It turned out that Arndt had an affinity for the art, and it did help her. She continued to practice even into adulthood.

But then, life got in the way — she joined the Army, got married, had children. Calligraphy became a sort of relic from her childhood. Then, tragedy struck Arndt again.

Chronic myelocytic leukemia is a slow growing cancer that typically occurs in older adults — Arndt is one of her oncologist’s youngest patients with this type of leukemia. There is no true remission, as it is a rare type of cancer that is more chronic than it is life-threatening. Patients can live very long lives, managing the illness, albeit with some side effects.

“I will always be in treatment,” said Arndt.

As she struggled again to process the grief that accompanies a serious diagnosis, she reached for calligraphy. Just over two months after her diagnosis, Arndt found herself awake at midnight, pondering her life. She began looking online for a calligraphy guild, but the nearest active organization was in Washington, D.C.

The Yorktown Calligraphy Guild was born.

Over the next few days, Arndt began reaching out to people she knew, posting on Facebook, and she recruited 10 members. By February, she had 100 members, most of whom were neophytes simply interested in the art.

Now, four years later, the Guild has 300 members, and Arndt teaches classes each month at the Poquoson Library. One of her members is a member of IAMPETH — International Association of Master Penmen, Engrossers, and Teachers of Handwriting — and teaches calligraphy throughout the country. She has a handful of members who Arndt rates at the professional level, but most of her members are folks at different levels of amateur who simply enjoy the hobby.

Her instinct to reach out to the ancient art in times of great stress makes sense. Practicing the fluid strokes requires intense focus, and many advocates say the mindful hobby is a boon to their mental health.

Even as she manages a chronic illness, works full time and takes care of her family, Arndt spends at least some part of each day either doing calligraphy or sitting near her calligraphy.

“It’s just something I like to do at the end of the day,” she said. “I just like doing it.”

The next class will take place at 10:30 a.m. Feb. 22 at the Poquoson Library. Class size is limited to 20, and those interested can register on the Yorktown Calligraphy Guild’s Facebook page (facebook.com/groups/yorktowncg) or email Arndt at yorktowncg@gmail.com.