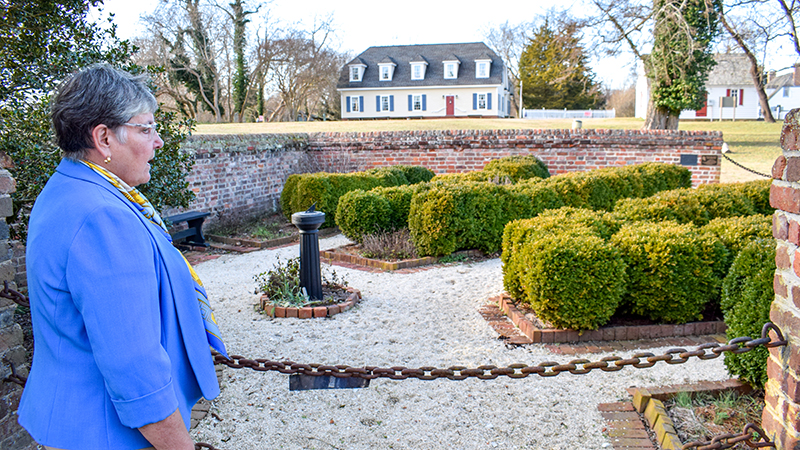 Regent Jennifer Carver, tells about the colonial herb garden shaped like a goose’s foot made from boxwood cuttings from Mount Vernon and gifted by Children of the American Revolution.

The Comte de Grasse Chapter of the National Society of Daughters of the American Revolution, will celebrate 100 years of service to Yorktown on Feb. 2, 2022. Emma Leake Chenowith started the chapter in 1922.

Tied in with local ladies focused on preservation, Chenoweth was the chapter’s first secretary. They became the Comte de Grasse Chapter, named after Admiral Comte de Grasse who brought in the French fleet defeating Cornwallis in 1781, ending the American Revolution.

“Our mission is, ‘Proudly preserving the past so as to ensure the future,’” Regent Jennifer Carver said.

The Comte de Grasse Chapter purchased Yorktown Custom House in 1924. It is their chapter house, and members have opened its museum to the public to sharing the history and significance of Yorktown since 1930.

Boasting 196 members and 60 associates, Comte de Grasse Chapter of DAR’s threefold mission is historic preservation, education and patriotism. Their work with Yorktown Custom House fulfills their preservation goal. They use the building to educate the public. They support DAR schools with monetary and material contributions and provide supplies and literacy volunteers to local classrooms. The chapter also links high school students to scholarships and awards the DAR Good Citizen award to local students.

“We do exhibits and partner with Watermen’s Museum or the National Park Service to contribute to events like the Civil War weekend,” Carver said, giving credit to chapter Historian and Docent Chairman, Pauline Reimold, for facilitating this effort.

Comte de Grasse Chapter helped found the National Monument that became today’s National Park. They were the first to do a wreath laying ceremony at The Victory Monument.

In the 1940s, a massive bandage-rolling operation produced 246,000 bandages rolled in their chapter room. Comte de Grass Chapter rented out the space at no cost to the Red Cross.

In the area of patriotism, the chapter supports the National Society’s committees including DAR Service to Veterans and National Defense.

“We honor them (male or female) with the DAR Good Citizen Award, which allows the winner to enter the district and go on to state for a scholarship,” Carver said.

An active member of Comte de Grasse Chapter, along with her disabled-veteran husband, gathers clothing for veterans at the Hampton VA Hospital. They also donate gift cards, coats and toiletries.

“DAR is the largest women’s service organization,” Carver said. “Each member is challenged to serve in her community.”

Carver, who joined DAR in 2009, takes her Welsh Terrier, Winnie the Pooch, Gwyneth of York, to nursing homes and to libraries to read. Her patriot is Elisha Williams, a delegate to the Maryland Constitution Convention and justice of the peace. Each DAR member must be female and have a patriot ancestor who fought/gave aid during The American Revolutionary War.

One of the major functions of the chapter’s Americanism committee is to help host naturalization ceremonies for up to 100 new citizens, held at the Victory Monument.

Yorktown Custom House is considered a Virginia DAR shrine, which brings DAR projects to help with the Custom House.

Reimold has been in DAR for 42 years and in the Comte de Grasse Chapter since 2007. Her patriot is Aaron Littlefield, a 17-year-old in Massachusetts sent on secret missions as noted in the Boston Archives. She is a tax aid for the free AARP tax organization and also docents at the Gloucester Museum.

“Daughters of the American Revolution is not just a hereditary organization,” Carver said. “It is a service to the community.”

Contact jkcarver@cox.net for further info on special tours of Yorktown Custom House or to inquire about DAR membership.