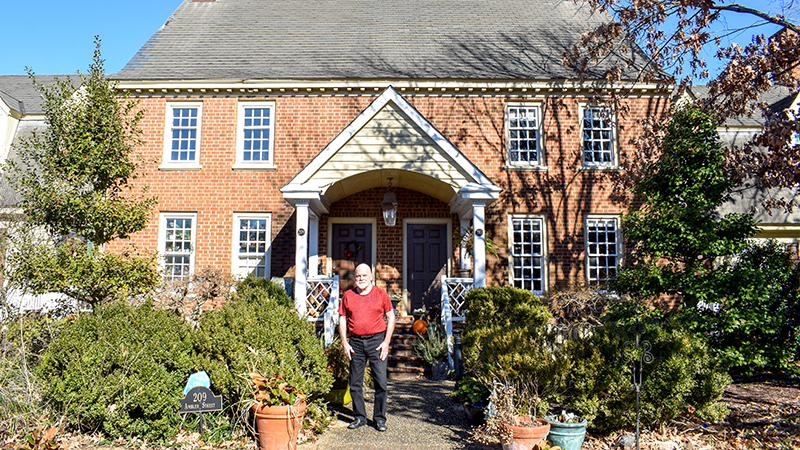 Innkeeper Bill Cole welcomes guests to York River Inn Bed and Breakfast. He filled the home with family antiques after purchasing it in 1995.

Courtland native, Bill Cole, was raised in a farming family in Blackhead, the community where the Nat Turner Slave Insurrection occurred. His parents built a savings plan to send their two sons to college.

“I thanked my mother many times,” Cole said. “I would have been a poor and very unhappy farmer.”

He started at the College of William & Mary as an elementary education major. Between his junior and senior year, Cole spent a summer in ROTC, after which he went to work for Colonial Williamsburg.

“I made money hand over fist at King’s Arms Tavern, which took all the pressure off of my poor mother,” he said. “William & Mary made me much richer in culture, interest and everything about my life.”

Cole taught school for a year after graduating with a Bachelor of Arts in elementary education in 1970. He returned to work for Colonial Williamsburg in an administrative position teaching historical interpreters and those in exhibition buildings and administration. He was an education specialist designing school programs his last five years before leaving in 1989.

Cole was ready for a change, and Yorktown’s Watermen’s Museum needed someone to organize them as a professional museum, raise funding, get education and development programs going and continue their relationship with the public.

“I was director of Watermen’s for five years in its beginning,” he said. “I took the budget from zero to $200,000 with donations, support of volunteers and contributors.”

When he was leaving the museum, the county wanted a local bed and breakfast. A home overlooking Waterman’s was for sale.

Designed by architect Carlton Abbitt in 1984 to emulate a large Southern plantation house, Cole bought the structure’s center of six units in 1995. He filled it with family antiques.

York River Inn hosted its first guests in 1996. It is one of three bed and breakfasts in historic Yorktown. Each has its own niche.

“Hornsby House Inn is a beautiful place. I’m happy to refer people to them, and they refer to me,” Cole said. “The wonderful Marl Inn offers rooms with kitchenettes and two beds.”

At York River Inn, the second-floor President’s Room offers a deck overlooking the river. Down the hall, the Pocahontas Room is filled with memorabilia pertaining to the American Indian woman. One engraving of Pocahontas is an 1844 original McKenney & Hall creation.

The third-floor Washington Suite features a king-size antique bed belonging to Cole’s family. This largest room has a private bath with Jacuzzi and sweeping views of the York River. A gourmet breakfast is served daily in his antiques-filled dining room. Guests can walk down to a private beach from the inn.

“Every day when I hear someone calling, I say, ‘They’re going to be nice people’ — and they are,” he said. “I’ve been in the business 24 years, and I can count on one hand the minor, inconsequential problems I’ve had.”

In addition to running the inn, Cole is working on an editing project for an author, doing historical research for groups and recreating a self-guided walking tour guide of Yorktown he partnered in creating in 2006.

Cole also buys and sells antiques. He trades in maps, prints and other specialties. He volunteers with the Celebrate Yorktown Committee, which he started 30 years ago. He volunteers with Grace Church for People Offering Resources Together (PORT), volunteering to help the homeless. He is also a staunch supporter and donor to Virginia Historical Society in Richmond.

“I should retire and move on, but this inn lets me live in a big house on the river and have my stuff,” he said. “And I’ve got a lot of stuff.”

In a recent review, John, a guest from North Carolina, wrote, “You are truly a credit to your craft. Our stay was everything we expected and much more. Thank you for the food and gracious hospitality.”