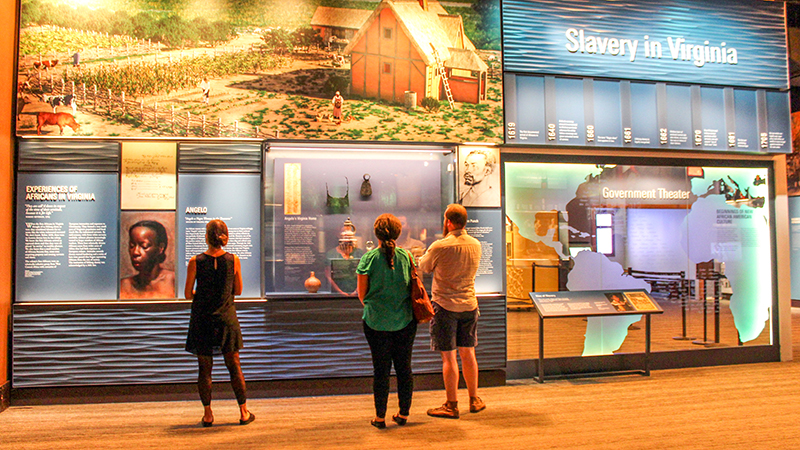 February will be commemorated as African-American Cultural Heritage Month at Jamestown Settlement and the American Revolution Museum at Yorktown. (submitted photo)

Jamestown Settlement and the American Revolution Museum at Yorktown will present “African-American Cultural Heritage Month” throughout the month of February, featuring engaging gallery exhibits and educational programs that reflect and honor the significant contributions and achievements of African Americans in our nation’s history.

At Jamestown Settlement, visitors can explore the culture of the first west central Africans to arrive in 1619, comparing it with that of the English and Powhatan Indians they encountered in Virginia, through immersive exhibition galleries, films and educational programs, culminating on Feb. 29 with “After Angelo,” a special event featuring music, song and storytelling honoring the legacy of the first African woman listed in Jamestown’s historical record.

At the American Revolution Museum at Yorktown, visitors can experience permanent gallery exhibits and the “Forgotten Soldier: African Americans in the Revolutionary War” special exhibition, on display through March 22, exploring personal stories of enslaved and free African Americans on both sides of the war with rare artifacts, interactives and compelling art displays, including a contemporary work by nationally acclaimed artist Titus Kaphar. A free public lecture at 7 p.m. on Feb. 27 by research historian Karen E. Sutton explores African-American soldiers and sailors in the Revolutionary War, with advance reservations required at rsvp.lecture@jyf.virginia.gov or (757) 253-4572.

Jamestown Settlement’s immersive exhibition galleries feature refreshed exhibits incorporating new research on the first recorded Africans to arrive in 1619 and an expanded collection of rare objects relating to the nation’s beginnings in 17th-century Virginia, including more than 500 objects representative of the Powhatan Indian, English and west central African cultures. Thirty objects from the Ambundu culture of Angola are exhibited, courtesy of the Mercer Museum of the Bucks County Historical Society in Doylestown, Pa., in a diorama representing the Ndongan culture of the first known Africans in Virginia. A dramatic multimedia presentation, “From Africa to Virginia,” chronicles African encounters with Europeans, the impact on African culture, and the development of the transatlantic slave trade.

Special educational programs at Jamestown Settlement, held at 10 a.m. to 2 p.m. Feb. 8-9 and 15-29, allow visitors to learn about the culture, society and technology of the west central Africans, the first recorded arrival of Africans to Virginia in 1619, and stories of Africans in Virginia and their shift in status as laws changed, developing into the institution of slavery. Ongoing hands-on programs with reproduction African objects, images and documents will rotate through exhibit galleries, exploring aspects of African tools, weaponry, transportation, housing, clothing and ornamentation.

From the first shots fired at the Boston Massacre to the final victory at Yorktown and points in between, permanent gallery exhibits, films and classroom presentations will explore the contributions of both well-known and little-known participants in the Revolutionary War. Among the iconic artifacts of the Revolution on exhibit in the museum’s permanent galleries is a circa 1733 portrait of Ayuba Suleiman Diallo, one of the two earliest known portraits done from life of an African who had been enslaved in the 13 British colonies that became the United States of America. Also on display is a first edition of the Phillis Wheatley 1773 volume, “Poems on Various Subjects, Religious and Moral,” the first book to be published by an African American.