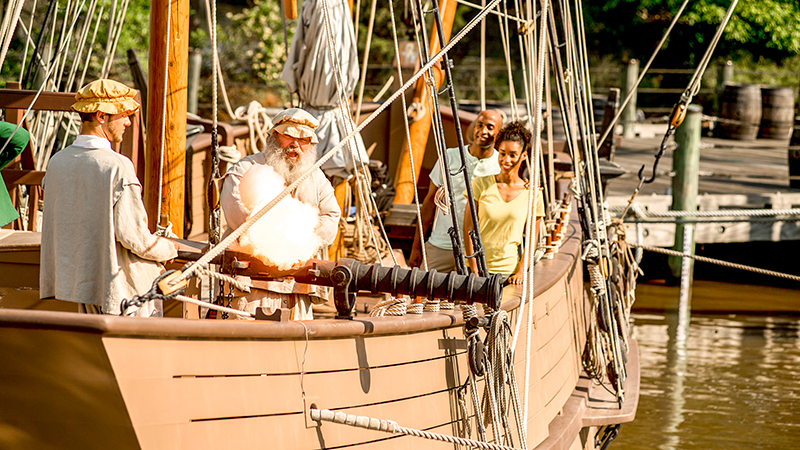 Paid visitation in 2019 at Jamestown Settlement and American Revolution Museum at Yorktown living-history museums operated by the state’s Jamestown-Yorktown Foundation, totaled 536,496, an increase of .5 percent from 2018. Admissions revenue amounted to $5,890,586 in 2019, up 4.2 percent.

The Foundation also experienced a 7.3-percent increase in its sales of cooperative tickets and packages with area attractions, including the America’s Historic Triangle ticket that offers seven days of unlimited admission to Jamestown Settlement, Historic Jamestowne, Colonial Williamsburg, Yorktown Battlefield and the American Revolution Museum at Yorktown. Online bookings for tickets on the Foundation’s website, historyisfun.org, were up 32.8 percent in 2019 and produced $539,946 in ticket revenue.

“We were delighted to see a significant increase in online ticket sales directly related to our advertising initiatives. Tickets that included area partners Colonial Williamsburg, Historic Jamestowne, Yorktown Battlefield as well as Busch Gardens and Water Country USA also were up,” Bak said. “Our museums share visitors with a number of attractions in the area and rely on national visitation to the state and the region.”

In addition to paid visitation, there were a total of 71,323 complimentary admissions to both museums in 2019, including children under 6, group escorts, promotional admissions, and residents of the City of Williamsburg and James City and York counties. Residents of James City County, York County and the City of Williamsburg, including William & Mary students, receive complimentary admission throughout the year with proof of residency.

Jamestown Settlement, located on State Route 31 just southwest of Williamsburg, features refreshed exhibition galleries and films, including a 4D experiential theater, that connect visitors with the lives of the Powhatan, English and west central African cultures that converged at 17th-century Jamestown, and historical interpretation in outdoor re-creations of a Powhatan Indian village, 1607 English ships and colonial fort. The American Revolution Museum at Yorktown, located on Route 1020 in Yorktown, features immersive films, exhibition galleries and interactive living-history experiences in outdoor re-creations of a Continental Army encampment and Revolution-era farm.

Jamestown Settlement and the American Revolution Museum at Yorktown are administered by the Jamestown-Yorktown Foundation, an agency of the Commonwealth of Virginia accredited by the American Alliance of Museums.