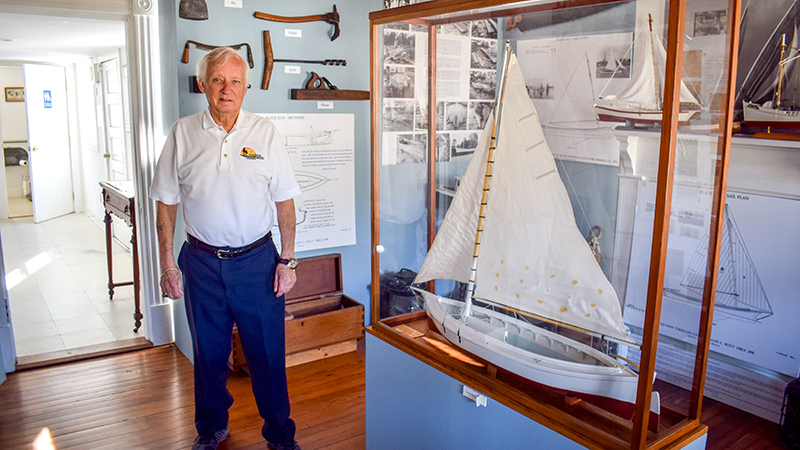 Paul Whitlow talks about the “Evolution of Boat Building” exhibit at Poquoson Museum.

In 2001, members of Poquoson’s Historical Commission united to explore the possibility of establishing a museum for their city.

“There was nothing to preserve the heritage, culture and traditions of our small city,” Paul Whitlow said.

Today’s Poquoson Museum president, Whitlow, was a teen when his family relocated to Morocco. When he returned to the United States, he became a first-class electrician at the shipyard before following his passion to join the Newport News Police Department. He retired in 2003 as a lieutenant.

Whitlow earned his Bachelor of Science in government administration in 1982 from Christopher Newport University, his master’s in human resource management from Golden Gate University, and then graduated from the University of Louisville’s Administrative Officers Course, receiving the Dean’s Scholar award.

“We couldn’t find anything with a future,” Whitlow said. “We wondered if we could afford it and would the community support us.”

In 2003, Freeman Dryden had been farming his family land for 70 years, selling vegetables and other produce at Miss Becky’s store (now located on museum grounds). The Historical Commission approached him about his plans for the property, which he sold to them in 2003. The museum opened its doors to the public in 2007.

Poquoson Museum is a nonprofit organization with 120 members and 25 volunteers. They exist to preserve, promote, interpret, document and educate the public about the history and heritage of the Poquoson community.

The museum’s main exhibits are housed in the former farmhouse. Their “Greatest Generation” exhibit features photographs of Poquoson citizens who served during both world wars. A variety of uniforms from the world wars are displayed throughout the museum. Several cases offer visitors the opportunity to view service medals, ration cards and weapons. Whitlow loaned a number of personal items to enhance the educational experience, including his collection of guns.

Another exhibit pays tribute to local waterman and seafood. The “Evolution of Boat Building” exhibit details the history from Native American five-log canoes to present-day crafts.

The museum features a re-created 20th-century country store with sales counter, post office from Doc Riggins Pharmacy and a wooden “quilt,” each square created by a different craftsman.

“The city of Poquoson has been outstanding in their efforts to assist us,” Whitlow said. “Without their help, we couldn’t have done it.”

The city agreed to manage a $16,000 grant Poquoson Museum won to relocate the historic Tom Hunt’s Store to their grounds last year. They await metal shingles to secure its roof, then will replenish the store’s cypress siding.

“Our major concern now is the financing necessary to get that done,” he said, adding it could cost up to $80,000 to rehab the building.

Every dollar the museum receives goes back into their mission.

“I’m a firm believer that if you live in a community and want to make it better for your children, grandkids or people who visit, you have to do something besides sit on the couch,” Whitlow said.

The museum’s 15 acres have been put to good use. Their Marsh Walk and Nature Trail is a one-mile loop that attracts daily visitors.

“I never thought when we put this trail in that so many people would use it,” Whitlow said. “Every day people walk their pets here.”

Colonial Beekeepers maintains a bee yard out back and put in a new food plot of high clover for the bees.

The museum, in partnership with Virginia Cooperative Extension York County/Poquoson Master Gardeners, is working with the Virginia Forestry Service to establish a plot of 100 native longleaf pines. In addition, they tend the Poquoson Learning and Demonstration Garden onsite.

Cliff Coffman, vice president of the museum and building and grounds committee chairman, coordinates with Poquoson Boy Scout Troop 28 to help Scouts earn their Eagle Scout Badge. The museum has also been served by volunteer scouts from other surrounding cities.

A handful of volunteers are docents at the museum. But they need help.

“We’re working to get high school students as junior docents alongside our adults,” he said. “It will give them experience talking to small groups and the opportunity to earn volunteer hours.”

Paul and Barbara Whitlow received the local Exchange Club’s Book of Golden Deeds for their work with the historical commission and Poquoson Museum.

“We try to be a good neighbor to other civic organizations like the Masons, Virginia Education Association and Virginia Living Museum,” Whitlow said.

They rent their grounds to the Masons to hold fundraisers and to a local church for a tent revival.

“It helps us a little bit, and it helps them because they don’t have space and not enough parking,” Whitlow says. “We get some cash to offset expenses, and we let them set the price.”