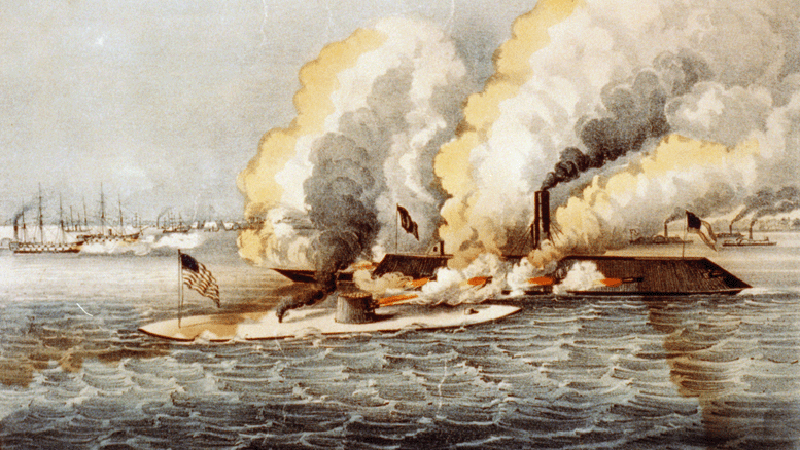 The Mariners’ Museum and Park will host a day-long event on March 7 filled with family-friendly programming and activities to commemorate the Battle of Hampton Roads, the famous Civil War battle that changed the course of naval history forever.

In the evening, the day of tribute will continue with the Museum’s popular food-tasting competition, History Bites. Activities during the day are free with $1 admission, while tickets are required for the evening affair.

Various activities will take place throughout the Museum to honor the 158th Anniversary of the Battle of Hampton Roads. Special guest appearances by Abraham Lincoln and Frederick Douglass, an inside look at the Batten Conservation Complex, and a BattleQuest Scavenger Hunt for kids are among the many highlights at this year’s event.

George Buss as Abraham Lincoln and Nathan Richardson as Fredrick Douglass, two of the earliest preeminent self-made men in American history, bring these historical characters to life. Buss has interpreted Abraham Lincoln for thousands of audiences across the United States to critical acclaim for over the past 25 years, and Richardson captures completely the physical and spiritual essence of the great writer, orator and abolitionist Frederick Douglass. These great American heroes will interact with visitors, take pictures and answer questions throughout the historic day.

Other activities during Battle of Hampton Roads Day include historical costumed interpreters from the Tidewater Maritime Living History Association, which will bring history to life through demonstrations and storytelling. Throughout the USS Monitor Center, guests will learn new stories about artifacts with in-gallery interpretation by museum staff and also meet renowned historian John V. Quarstein, who will provide some insight about the crews of both ironclads and engage with guests in a short question-and-answer session. Quarstein will also be available for a book signing in front of the museum gift shop between his gallery session talks.

The historic day will end with the fan-favorite History Bites, which is back for the seventh straight year, at 6:30 p.m. Hampton Roads’ top restaurants and caterers will prepare their best interpretations of 19th-century dishes while they also set to battle it out for the coveted Cast-Iron Skillet Awards, including People’s Choice and Judge’s Choice. During the event, guests get to taste unlimited samples of all the dishes and mingle with Abraham Lincoln, Frederick Douglass and other historical interpreters.

Tickets for the evening event are $30 for museum members and $40 for non-members and include unlimited food tastings and one drink ticket. A cash bar will offer a selection of beers and wines.

Schedule of Events for Battle of Hampton Roads Day

Hampton Roads: Then and Now

Starting 9 a.m., and then every hour / Main Lobby

Behind-the-Scenes in the Conservation Wet Laboratory

In the Monitor Gallery with John V. Quarstein

Self-Made Men: A conversation with Abraham Lincoln and Frederick Douglass

At the Core of the Problem: Cleaning inside USS Monitor’s Dahlgren Shell Guns