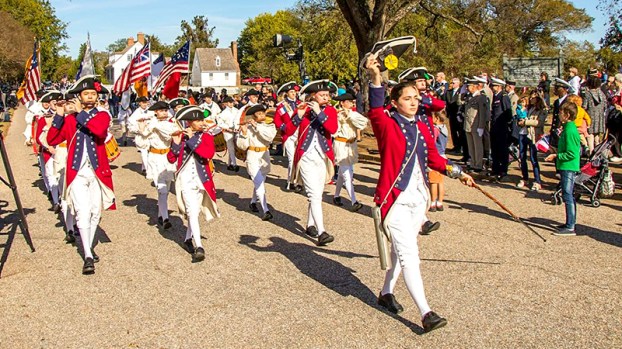 The Fifes and Drums of York Town perform at about 100 events a year, mainly in Yorktown and the surrounding communities. (submitted photo) 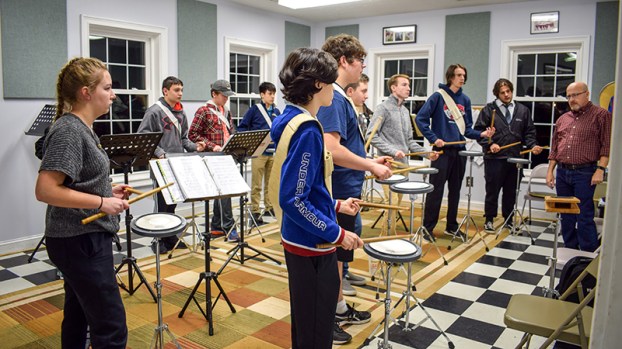 Members of the Fifes and Drums of York Town practice twice weekly, and they are currently in the middle of a fundraising campaign to raise money for new uniforms. 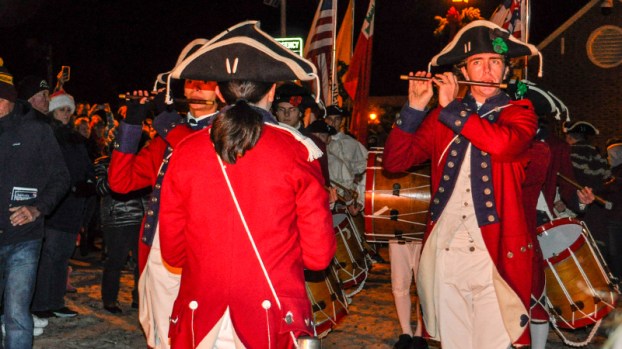 Founded through York County Parks and Recreation Department as part of the 1976 bicentennial, The Fifes and Drums of York Town is the historic city’s most visible performing arts group. They call themselves “The Face of Yorktown.”

The corps offers opportunities for children between the ages of 8 and 10 with no previous musical exposure.

“My daughter is a fine example,” Sharra Odom, corps president, says of Stepheney Odom-Thomas. “She’s now head fifer and didn’t have a lick of music coming in. If you want to put some effort into it, you’re in.”

Recruits receive instruction in the rudiments of 18th- and 19th-century American field music from four instructors. After 12 to 18 months, they promote to Junior Corps, are issued a free uniform and integrated into the main performance body. Juniors progress through five levels before promotion to Senior Corps. Seniors earn the privilege of wearing the distinctive regiment uniform.

Most of the 42 corps members are from Yorktown, but they range from Chesapeake to Williamsburg. Their goal is to have 60 members spread across all ranks.

“They represent Yorktown and history,” Odom says. “There is a certain amount of decorum expected.”

They grow up together, becoming good friends.

The Fifes and Drums of York Town is an all-volunteer organization, run by corps members’ families. Instructors are paid.

Their true performance area is Yorktown Battlefield National Park and historic Yorktown. All rehearsals and shows are open to the public. Twice-weekly rehearsals are held at their 4,000-square-foot headquarters on Church Street.

They do up to 100 performances annually, from Norfolk’s St. Patrick’s Day Parade to Washington, D.C.’s Memorial Day Parade to Annual Fireworks Days at Mt. Vernon to Yorktown Day events.

Fifes and Drums is based on four pillars: history, music, community service and leadership.

“Everything we do is imbued with history,” Odom said. “Last year’s summer trip was to Charleston, S.C., where we stayed onboard the USS Yorktown.”

The second pillar is music. Recruits learn to read music and music theory. They are a full-on music venue for $40 monthly, including four or five lessons a month.

The third pillar is community service.

“It’s not uncommon for graduating seniors to have a thousand community-service hours — all documented,” Odom says. “When you start applying for college that’s huge.”

The fourth pillar is leadership, learned in Senior Corps.

“Many of us are retired military officers,” Odom says of their volunteer board. “Leadership is very important to us.”

Junior and Senior Corps members perform in 100-degree weather in wool coats. They learn stamina, fortitude, punctuality and commitment. They are treated like rockstars, which builds self-esteem in their members.

Recruiting can be a challenge, as Fifes and Drums competes with many other programs and other things, such as after-school sports, Scouting, school bands and more. It’s a lot of time and commitment, but very balanced.

“You can live other lives and still fit around it,” Odom says.

The group is currently fundraising to replace all of its redcoats, a project that is expected to cost $20,000.

The Fifes and Drums of York Town hire out for private shows, weddings and other events, usually with two fifers and one drummer.

The group is the “adopted children” of the U.S. Army Old Guard Fife and Drum Corps and a recruiting venue for them.

“I’ve got at least two young men who are looking hard at going to the Old Guard,” Odom says.

Steve Southard, president of the alumni association, was a corps member from 1989 to ’93. He teaches fife in Yorktown and teaches for Colonial Williamsburg Fife and Drums, where his daughter started is a member.

“I like watching them progress,” he said. “We constantly give them higher things to achieve.”

“You learn a lot about music and make a lot of friends,” he explains. “The leadership, the extracurricular and public speaking look good on college applications.”

“I like the experience of a whole different world in history,” Odom-Thomas says. “We attended a big muster in Connecticut, with so many fife and drum corps; that’s one of the best things.”