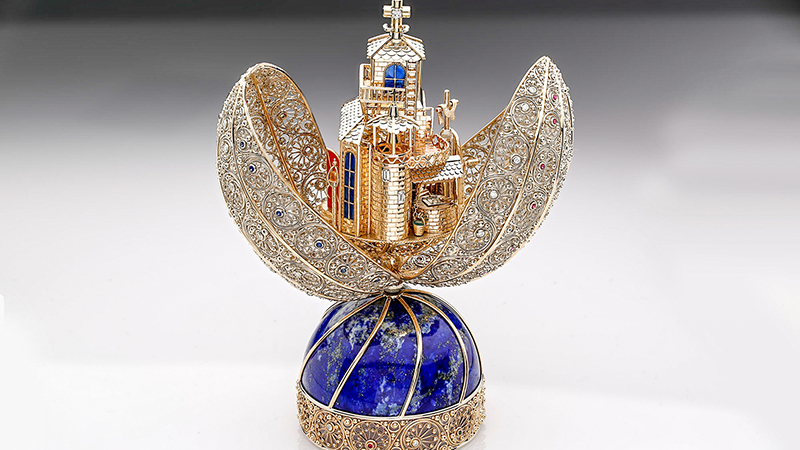 Aleksander Maryaskin, of Simply Unique Jewelry, created a tiny church, with functional doors and windows, inside a gemstone-encrusted egg. The award-winning work is on display at the shop on Route 17. (Rio Grande Photo)

Encased in glass, turning slowly on a mirrored dais on the jewelry case at Simply Unique Jewelry on Route 17 near County Grill, is the effective “crown jewel” of Aleksander Maryaskin’s career. Intricately tooled in 14-carat gold, a tiny church, complete with functional doors and windows, sits inside a gemstone-encrusted gold egg. Containing more than three carats of diamonds, sapphires, rubies and tsavorite garnets, the piece has been appraised at $217,000.

The egg opens with a kind of twist, rather than a straight hinge. When asked why, Maryaskin’s response reveals how passionate he is about his work.

“I did it for the challenge itself,” he says simply. Maryaskin invested 538 hours in creating the egg, all stolen moments from his bench work. He worked seven days a week, sometimes working 12 to 14 hours straight.

It paid off. The piece won first place in the 2017 Saul Bell Design Award. This first-place finish qualified Maryaskin to compete on the international scale.

“I still get goose bumps thinking about it,” he says, stretching out his arm.

Maryaskin won the Champion of the Champions award at the International Jewellry Design Excellence Award just over a year ago in 2019. Known as the “Oscars of the jewelry industry,” the biennial competition draws artists from all over the world.

Maryaskin and business partner Tim Wright traveled to Hong Kong in order to compete for the prestigious honor. With 137 competitors from throughout the world, and just 15 from North America, the two thought it would be a great experience. They did not expect to take home first prize.

“We applied, then we totally forgot about it, because there’s no way,” Maryaskin said with a smile. “No way.”

However, one of the main judges was impressed that Maryaskin had not only designed his piece but also created it. Many of the other jewelers were simply designers who had their work commissioned. Maryaskin did not even sketch his work — he only works in 3D.

“I can’t draw at all,” he laughs. “But give me some metal, and I can make anything.”

Maryaskin and Wright fulfill the adage “opposites attract.” Maryaskin is the quirkier of the two, always looking for ways to put his unique stamp on a piece of jewelry, like creating intricate filigree work on the back of a pendant, or placing a gemstone within a concave surround that reflects its light from all angles, amplifying the drama of the piece. Wright, on the other hand, is a self-described traditionalist and businessman. Both men know that the key to their decade of successful business is happy customers and exacting standards.

Wright and Maryaskin met while the two were working for Newport News institution Charlie’s Jewelry. Ten years ago this May, amid the financial crisis, they took the plunge and opened their own store in York County, choosing this location deliberately.

“We did not want to directly compete with other jewelers,” said Wright. “Most of the jewelers in the area, we’re friends with.”

Wright and Maryaskin take a lot of factors into consideration when they are helping a client choose a piece of jewelry. They get to know their clients, which is key to finding a piece that will fit that person’s lifestyle.

“We try to make our pieces very wearable, based on what you do,” points out Wright.

They are also absolutely uncompromising when it comes to quality, and that dedication often results in working almost exclusively with American manufacturers.

“I would say 85 to 90 percent of our jewelry is American made,” said Wright.

The biggest trend the two have seen since opening their doors has been, like it has been for many industries, the explosion of jewelry available online. Wright understands the allure of cheap prices, but contends that most of the pieces found online lack quality.

Simply Unique’s inventory addresses a wide variety of price points, from kitschy charms shaped like flip-flops, to multi-carat serious pieces of jewelry, but every piece carries their “put-your-name-on-it” guarantee.