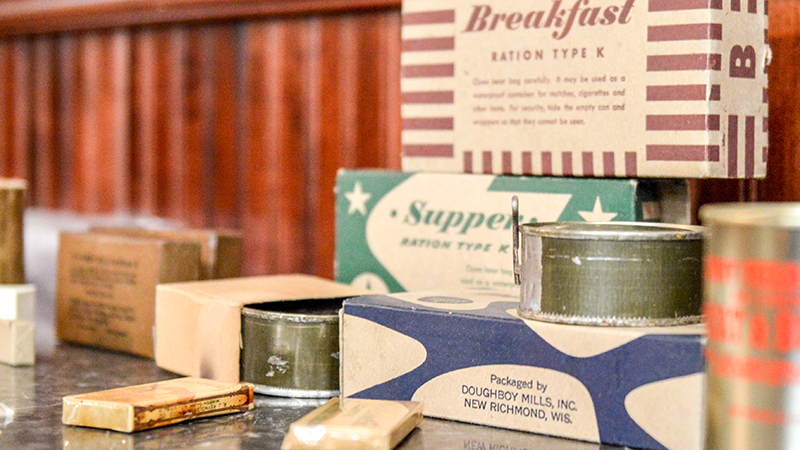 Historical rations are displayed during Correy Twilley’s presentation at the U.S. Army’s Quartermaster Museum at Fort Lee on Feb. 27.

An audience of nearly 50 gathered in the museum’s regimental room to hear Correy Twilley, director and curator of the U.S. Army’s Quartermaster Museum at Fort Lee, speak — and of course sample some rum and chocolate.

Twilley started the conversation by clarifying his role as a curator, pointing out that “if you look around this room, every single thing that you lay your eyes on will turn back into dirt; it’s my job to make sure that takes as long as possible.” This clever ice breaker set the tone to an engaging evening.

He pointed out that Congress established the U.S. Army ration in 1775, and ironically, one of the first things they did to save money was eliminate fruits and vegetables — not a good nutritional move, as many in the audience noted. Spruce beer, in its alcoholic format, appeared in rations shortly thereafter as a means of providing liquid.

The next segment of the presentation did include rum. Pusser’s Rum, that is — and yes, there were shot-glass-size samples. It’s commonly available at many Virginia ABC stores, but what many didn’t know is that military rations switched from spruce beer to rum as a preferred liquid in 1821.

Pusser’s Rum has been manufacturing the same recipe since 1655 for the British Navy, and the early quartermasters at the time deemed it worthy to include in military rations. It wasn’t until 1970 that Pusser’s Rum became available for purchase to civilians. The bottles that were opened for sampling did not go to waste, as a few in the audience asked for additional samples just to confirm what their taste buds already knew.

President Andrew Jackson issued an executive order sobering up military rations at the time and replaced alcohol with coffee. At the time, quartermasters were roasting more than 400,000 pounds of coffee daily and shipping them to the field. By the time World War II rolled around, roasted coffee appeared as water soluble coffee, and American servicemembers consumed some 258 million pounds of it during the conflict. Bouillon was also introduced at the time in rations and became the second-favored hot drink next to coffee. Synthetic beverage powder emerged during the time as well, morphing its way with sugar additives as Kool-Aid in the civilian market after the war.

Coca-Cola emerged during World War II as a huge morale booster, partly because of a decision to allow servicemembers to purchase bottles of it for five cents wherever they were in the world, even in the jungles and islands of the Pacific theater. Someone in the audience inquired if cocaine (yes, the narcotic type and whose trafficking led to the Netflix TV Show Marcos and Narcos Mexico) was still an ingredient in Coca-Cola distributed to service members. This was not the case, which led to more chuckles from the audience.

Chuckles turned into tantalized taste buds, as the presentation shifted to chocolate. In fact, according to Twilley, during World War II, the U.S. consumed more chocolate than any other country. The problem was that it melted very quickly at a low temperature, hence the expertise of the Hershey company, among others. Hershey developed a recipe that included stabilizers, which is the reason why your chocolate bar, to this day, does not melt the minute you pick it up. To the delight of many, the presentation ended with a few samplings of store-bought chocolate, military chocolates, and of course the last bit of Pusser’s Rum.