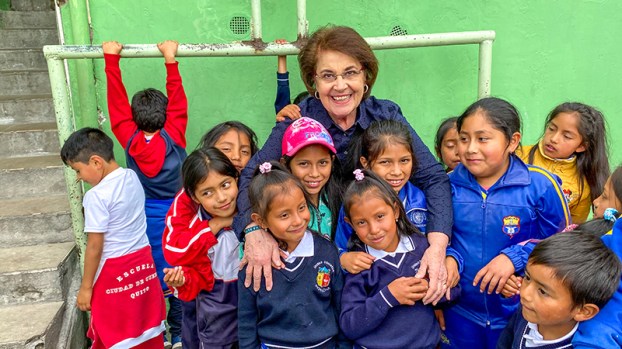 Susette Goff receives “lots of hugs” from the children she serves at Refugio de los Sueños. “I want people to know this is not the Ecuadorian people,” Goff said, referring to the street people around the Refugio. “They’re are the most gentle people in the world. This is just a pocket like in every other city.” 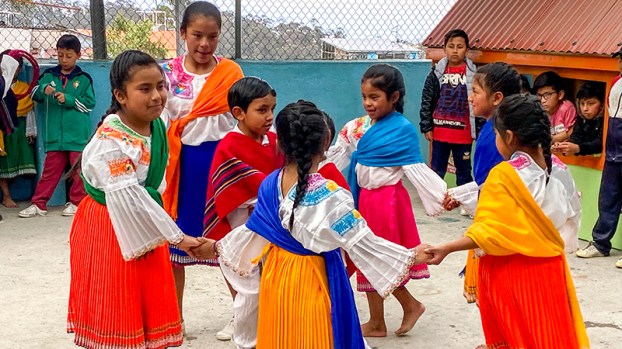 “I was one of the first Rotary exchange students sent to Argentina,” Pennsylvania native Susette Goff said. “I vowed to give back to them for that opportunity.”

Goff earned her Bachelor of Arts in education and did graduate work in Vermont and Madrid. She moved to Virginia with her husband’s military career and taught Spanish in Warwick High School’s International Baccalaureate program. She retired in 2003.

“As a teacher, I took a course in Ecuador and someone took me to a place they were clearing for street kids,” she explains. “That was it: I fell in love with it.”

Goff, a Yorktown Rotary Club member, began working on the side of a volcano outside of Quito, Ecuador. Originally, she worked with multiple government-run refuges. Two years ago, in response to a letter from Ecuadorian officials announcing the shutdown of Refugio de los Sueños (‘A Place Where Dreams Come True’), Goff took over management of the facility.

“It was the best blessing for the refuge.” Goff said. “The workers are much calmer and not afraid of losing their jobs.”

When Goff’s family started, there were only 25 children until they discovered the kids (ages four to 17) could go to school. There are 160 children there today. Goff has visited the Refugio in spring and fall for the past 20 years.

Originally, the refuge was a cleared spot with dilapidated infrastructure — caved-in walls and see-through floors. Goff oversaw the effort to renovate.

Former Yorktown Rotarian Jim Sawhill was instrumental in getting Yorktown Rotary Club involved with the Refugio. Subsequently, memorial donations for him helped build an addition to the refuge called La Sala La Vida Practica, where the children learn life skills including sleeping in and making a bed. They also learn to clean up a kitchen.

Yorktown Rotary Club updated the Refugio’s infrastructure, working in partnership with Mi Tad del Mundo Rotary Club in Quito. They built a playhouse and purchased equipment for their dental clinic. They provided a carpentry shop and bakery along with needed materials to teach students a vocation.

A Rotaract group (18- to 30-year-olds) along with Newport News college students helped bring water to the Refugio.

“I had to teach the kids how to touch water, which was used for punishment,” Goff said. “When we got hot water, the kids said, ‘Susette, the water smokes’ because they’d never seen hot water.”

The Rotary Club put in showers, because the children were being teased for going to school dirty. Refugio staff wash their clothes, and a former Refugio girl (now full-time employee) teaches them how to wash and comb their hair.

“While seeing very real poverty, the Refugio children were so loving and caring with us,” Yorktown Rotarian Ed Jackson said. “I was happy to see how they shared and looked after one another.”

“The Refugio truly is that for the children,” Goff says. “When you see them come through the gates, it’s an unbelievable transformation; they’re so happy there.”

The workers give lots of hugs, which the children need because many of them are severely abused.

“In an area so poor and bad, these kids were happy and the staff lovingly dedicated,” St. Mark Lutheran member Tom Teigler said. “They are so appreciative of those who think of them and don’t take it for granted.”

Sometimes people think it’s a school or a daycare, but it’s a refuge. The kids aren’t there all the time. They come to escape the dangers of the street, abusive parents, everything imaginable. Some are just poor and come for food.

Goff led her church, St. Mark Lutheran in Yorktown, to work with the Refugio in 2006. Each child has a sponsor who provides medical and dental care, school uniforms, all other school supplies and helps with vocational education and materials for their bakery and carpentry shop.

“If we didn’t send the kids to school, there is no way they would go,” Goff said. “We buy them uniforms, shoes, a special gym outfit, books and other odds and ends.”

When Goff took over management of the Refugio, St. Joan of Arc Catholic Church helped with food through a sponsorship program for each child annually.

A foundation out of Italy and Miami also helps with salaries.

The Refugio is open all day. Some kids go to school in the morning, and some in the afternoon.

“We have to have them out by 5, because at dark it’s extremely dangerous,” Goff said. “If they are living in a situation where the mother is a drug addict and they’re making them sell drugs, we try to find someone who’s poor to take the child in.”

Originally, The Refugio had mothers as young as 13.

“Now they’re already in their 20s,” Goff said. “That’s a monumental step in our teaching process.”

Many of the kids graduate from college or other higher learning opportunities. Pictures on the door into the eating area show these success stories.

“We have a soldier, chef, policeman, social worker and lawyer,” Goff said. “Our policeman wanted to protect kids, and our pro bono lawyer wanted to provide a security blanket for kids if they had legal problems.”

From a family of 11 living in one room, one girl went to sewing school and got out of that situation.

Goff returned to the states on March 10 from her most recent trip, just in time before flights were stopped due to the COVID-19 pandemic.

“I’m very worried about the children, but we’ve always had a backup plan in place due to rioting and other emergencies,” Goff said. “We do boxed lunches, and a few mothers and workers who live in the area handle that when the kids come to the Refugio to get their meal at lunchtime.”

Goff has a son, a daughter and five grandchildren (ages 1 to 7) who live in the Philadelphia area and Fairfax.

“Rather than a one-way street of giving, the Refugio insists on a two-way relationship, sharing stories, laughter, concern and prayers,” St. Mark Lutheran Church Pastor Joel Neubauer said. “When the children took my hand to show me the name of St. Mark painted on their wall, I knew immediately that they see one community uniting us — we are in no cliché way, a family.”

“When I come there, it’s ‘Grandma’s here!’” Goff said. “The saddest part is leaving, when the kids run alongside the car. It’s heartbreaking. The many, many, many people I have taken down there all said it was a life-altering experience.”