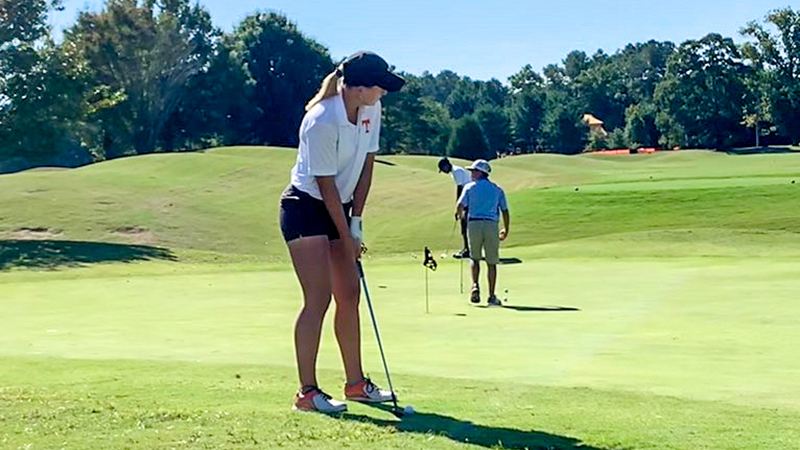 The postseason has gotten under way for Tabb’s golf team, and they were able to have some success. Cannon shot a score of 80 at the Class 3 Region A golf tournament, which allowed her to qualify for the state tournament. She is the only state qualifier from Yorktown.

It is the second time Cannon has qualified for the state tournament, having done so as a sophomore as well.

“I was able to shoot a good score with the birdie opportunities I had,” Cannon said. “It wasn’t my lowest round, but I gave it my best effort.”

Cannon believes her senior year has been her best year of high school golf. She averaged a score of 80 for the regular season, but as time went on, she started to shoot lower scores. She has had many matches where she shot in the 70s and was even able to earn her first hole-in-one this season.

Qualifying for states was a goal she had set for this season and knew she had to give it her best in order to do so. After competing in the state tournament as a sophomore, Cannon learned a couple of things, like staying confident in her shot.

“I just learned to trust my shot and commit to it,” she said. “Don’t let one hole get you down or let it get into your head and move harder and move on to the next hole.”

After having such a strong regular season, Cannon feels like her confidence is sky-high. She feels good about how she has played the last couple of weeks. As she prepares for the state tournament, she is confident about keeping things the same.

“My confidence level definitely shot up after having a great season, and I can’t wait to be able to take it into the states,” Cannon said. “With me having been in the same position before and I know as long as I stay calm and relaxed, everything will go fine.”