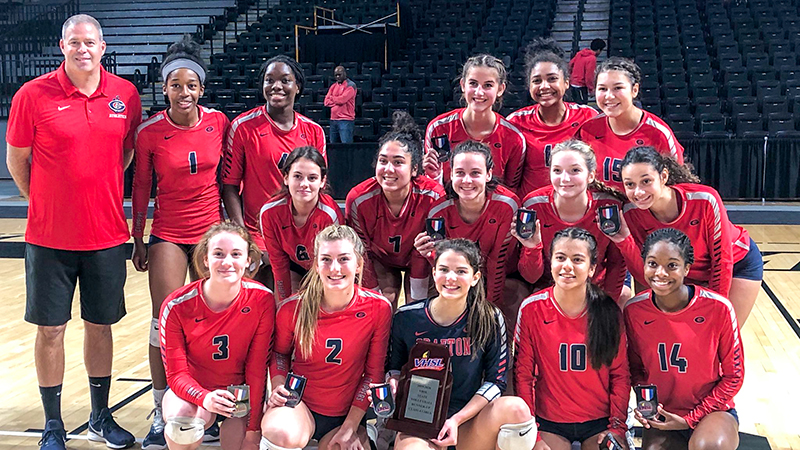 For the second consecutive season, the Lady Clippers took a loss to Loudoun County High School in the state championship game.

The magnificent season of Grafton High School girls’ volleyball team came to an end once again at the hands of Loudoun. Both teams matched up in the Class 4 state championship for the second consecutive year. Loudoun took the match in straight sets, ending a great season for Grafton.

“We knew Loudoun was a great team and that we would have to play error-free volleyball to win,” Grafton volleyball coach David Keeter said. “I am very proud of my girls for fighting to the end. It just wasn’t our night, but we feel really good about what we were able to accomplish this season.”

Grafton finished up the regular season 20-2 before going on yet another strong postseason run that included two region tournament shutout wins over Lake Taylor High School and Jamestown High School before taking a 3-2 loss to Warhill High School in the region championship game. The Lady Clippers immediately bounced back with a hard-earned 3-2 win over Courtland High School in the Class 4 semifinals. In another postseason rematch with Warhill, Grafton came away victorious this time with the state championship game appearance on the line.

“Going into the season, we had the target on our back, and everyone wanted to beat Grafton,” Keeter said. “We managed to go undefeated on the road for the season and only lose to Warhill.   After losing in the regional championship, we wanted a rematch. We felt like we had let a big game slip away, because we didn’t value the ball. All season, we talked about getting back to the state championship.”

Grafton finished the season with a 25-4 record and a state runner-up finish, and Keeter is excited about the future of Grafton volleyball.

“We connected as a family, and our seniors did a good job teaching the younger players how to come in and work every day,” he said. “We will continue to grow as a program and fight to get back to states and get better results.”