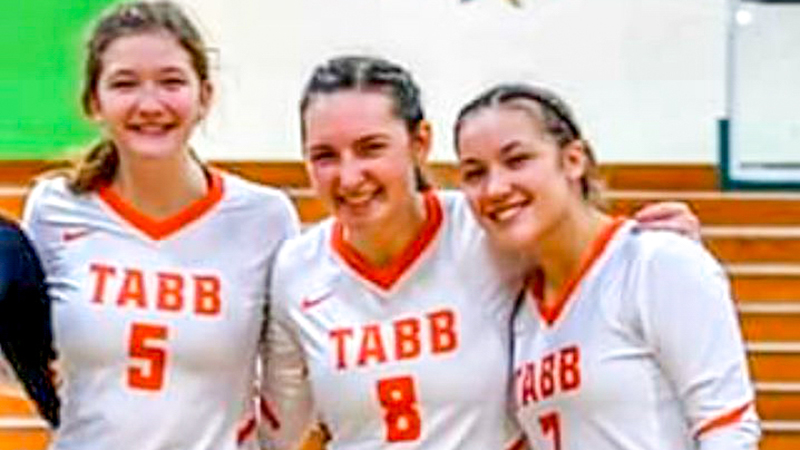 Multiple area players were selected to the All-State volleyball teams.

For the 2019-2020 fall season, York County had another successful year of girls’ volleyball play. There were three teams that finished runner up in their respective classifications — Tabb High School, Grafton High School and Poquoson High School. Each team had strong seasons that earned recognition throughout the district, region and state.

Poquoson had three girls selected to the Class 2 All-State teams, with Logan Mordica and Hannah Hibbs earning first team All-State honors. Mordica also took home Class 2 State Player of the Year, which was a first in school history. Chole Dupuis was selected second team All-State. Coach Tim Hatok was more than excited to see his players get recognition on the state level once again.

“It’s absolutely amazing for those girls to make All-State,” Hatok said. “To have other coaches recognize the quality of players I was able to work with is very nice. Having Logan earn Player of the Year honors as the first Poquoson player ever is another testament to the type of player and person she is.”

Mordica was also excited to have earned the honor.

“It’s a very big achievement for me,” Mordica said. “I never expected it to happen, even though I’m grateful that it did. But I could have never achieved this without my friends, family, teammates and coaches.”

Tabb had three girls earn All-State honors. Briana Macias and Ally Clark were selected first team Class 3 All-State. while Sarah Callender was selected second team All-State. Callender will be returning for her junior season next season. Prior to last season, Tabb had only had one player make All-State, and in the past two seasons, the Lady Tigers have had five.

“It’s nice to have them accomplish their goals,” Coach Maggie Kowalski said. “It is exciting because, as a coach, you know what their potential is, and when they get a chance to accomplish things like this, everyone else gets a chance to see it as well.”

Grafton had three seniors selected. Olivia Smalls being selected first team Class 4 All-State and Kennedy Hoge and Mariela Alvarado earning second team All-State honors. It was another solid season for Grafton that had returned to the Class 4 state title game for the second year in a row.

“It feels great to see these girls get the recognition they worked so hard for,” Coach David Keeter said. “We will miss these seniors, but they were great role models and leaders for our younger players. Because of them, we will be ready for battle next season.”

All three schools have a lot of talent coming back for next season, and it is likely each of these three teams will be back in state title contention.