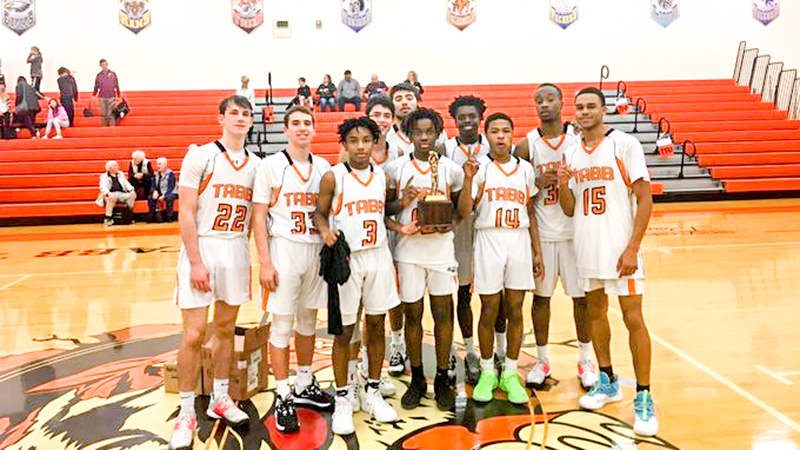 The Tabb High School Tigers took home the Bayport Holiday Tournament championship to start off the new year with a 7-2 record. (submitted photo)

The Tabb High School boys’ basketball team has gotten off to a solid start throughout the first month of the season, including the Tigers-hosted holiday tournament win.

The Tigers came into the new year with a 7-2 record. It is a solid start for a Tabb team that is fairly young. They have three streaks this season of at least two wins and recently added two more wins before 2020 as they took the crown at their self-hosted holiday tournament.

Tabb took on Middlesex High School as well as Poquoson High School in the tournament. After picking up a 20-plus point win over Middlesex, Tabb battled with Poquoson in the title game, earning a win by the slim margin of 44-42.

Coach Doug Baggett has been impressed so far with his young team’s start.

“We lost all but two starts off of last year’s team,” Baggett said. “And those guys accounted for about 44 points per game. So, to have these young players move up from the JV team, it has been really impressive.”

Tabb currently has five players averaging double figures. It is beyond what a lot of people may have expected for Tabb this season. Their only two losses came by a combined five points to two of the better teams in the district.

“These guys have bought into the program,” Baggett said. “They have won, and they are continuing to figure things out.”

Baggett believes if the Tigers can play down the stretch as they have at the start of this season, they can accomplish some good things. The Tigers continue to get contributions all around the board, as they don’t look to just one guy to carry the team.

“I got five guys scoring in double figures right now and one that’s close behind,” Baggett said. “It’s been an all-around team effort for us. Going forward we can do a better job defensively and as a smaller team than most we play we’ll have to be better tightening up on that end. Aside from that, I’ve been happy with what we have done to this point.”