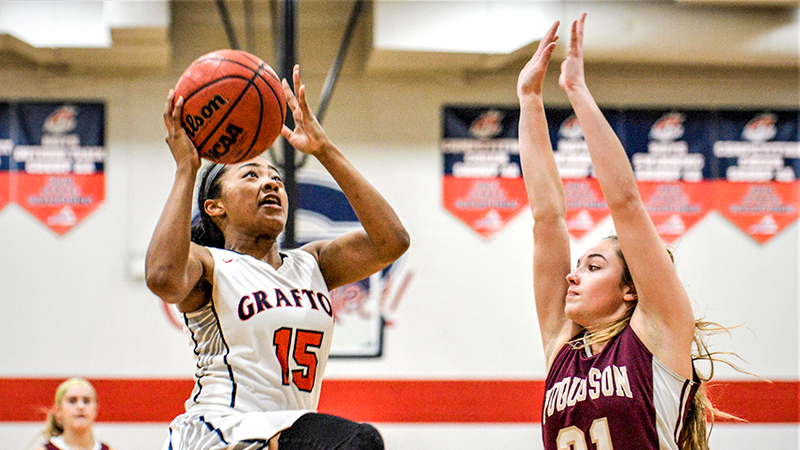 Nyah Chisolm goes for a layup for Grafton High School, which is 12-1 through the first 13 games of the season. (Thomas Matzke/Sunlake Sports)

The Grafton High School girls’ basketball team has only one loss on the season and continues to roll.

The Lady Clippers have gotten off to a remarkable start to the season. Through the first 13 games of the season, Grafton is 12-1, having taken a loss to a tough Warhill High School team that they will see again this season. They won their first nine games before that loss.

Coach Tommy Bayse is excited about the potential of the team.

“We’ve really only played one bad game so far this season,” Bayse said. “We have been playing really good. I thought we would be pretty good heading into this season with what we had returning.”

Bayse mentioned he knew the Lady Clippers could be special this year but wasn’t quite expecting the start they have had to the season. Grafton returned five starters from last year’s team, which has helped with continuity and chemistry. Even though Bayse has tweaked his starting lineup a bit, it still gives Grafton enough firepower coming off of the bench to keep steady. With such a strong start, Grafton has said their first goal is to try to win the Bay Rivers District, something they haven’t done since 2014. If they do win the district, that will likely set them up for a good seed in a tough region.

“A goal first and foremost is to win the district, and we feel like we have a good chance at doing that,” Bayse said. “We have a strong region, so it’s important for us to get a good seed there. Even though we are doing really well, we take things one day at a time. We feel good about where we are, and we are going to continue to keep working.”

Grafton has a good mixture of contributions from younger and more experienced players on the team. Nyah Chisolm returned this season as the leading scorer as a senior and is close to reaching the 1,000-point milestone this season. Despite this season, it gives Grafton a strong foundation for the future. Kiara Bomboy, a freshman, is the second-leading scorer on the team this season, which shows the contrast of how Grafton is built not just for this season but also for seasons ahead.

“We’d have a good group of freshmen and sophomore returning next season,” Bayse said. “Just looking at how we are set up, we should be pretty good in the future. We have had a lot of players step up for us so far this season.”

Bayse knows the strengths of the team and how they work best, which has been a big advantage to the 12-1 start Grafton has had. Even though there is more time left in the season, Grafton hopes to just keep progressing and taking things one game and one step at a time.