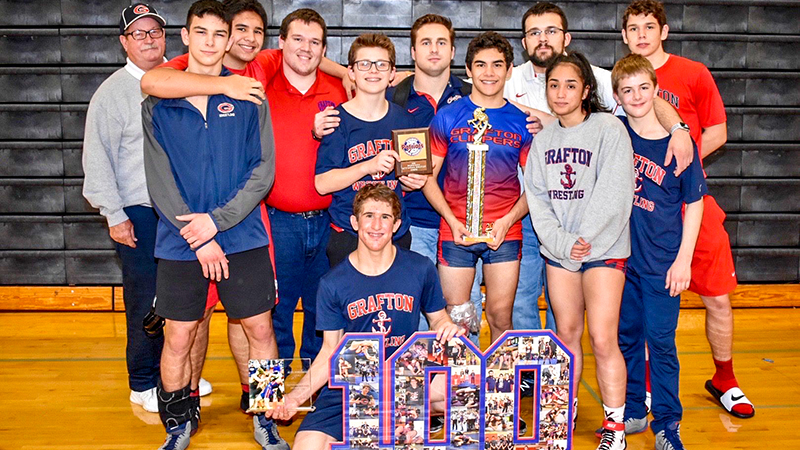 The Grafton wrestling team feels they are hitting their stride as they move into February and have some top competitors. (submitted photo)

The Grafton High School wrestling team feels good about where they are in the month of February.

With regional tournaments coming up and eventually the state tournament, Grafton feels good about the direction they are going. The Clippers have dealt with injuries to this point in the season; however, Coach Horace Kates sees his team getting healthy at the right time.

“We’ve had some injuries that put some guys out for a little longer than I would have liked earlier in the season, but we are getting healthy and really hitting our stride heading into the postseason,” Kates said.

Grafton has had quite a bit of individual success at multiple tournaments this year. Most recently, Ariana Carrasquillo took first place in the Virginia Girls Championship tournament, something Kates called a great achievement. Over the past couple of weeks, Carrasquillo has competed in several girls’ tournaments, where she has scored seven pins and one technical fall.

“She has been working extremely hard for the past three years and is starting to see that hard work pay off in these girls’ tournaments,” Kates said. “She competes in almost all of the boys’ tournaments we go to and always has had very good showings there. She is going to continue by attending national girls’ events in the offseason, where I expect her to be very competitive with the top girls in the country.”

Alex Sorenson has wrestled well to this point in the season for Grafton. He recently earned his 100th career victory. Sorenson has been a regional finalist for the past two seasons and finished sixth in the state a couple of seasons ago at the 132 weight class. Ryan Bithron, at 187, will likely see some success in the forthcoming postseason as well, Kates believes. Though new to the area and the team, Bithron has been receptive to the coaches. In addition to the season wrestlers, the Clippers also have new wrestlers that have joined the team this year in the higher weight classes, with Leo Aglibut at 220 and Rocco Hahn at 195, whom Kates has commended for the progress they have made.

“I can see both Ryan and Alex placing at states and regionals,” Kates said. “Both of them are very hard workers and have been wrestling very well for us this year.”

The Clippers have had a tough schedule this season. Grafton doesn’t have the numbers to fill out a dual team, so they have been facing a lot of strong individual competition. With the different competition they have faced with their schedule, they are hoping it will serve them best this month as when the postseason starts.