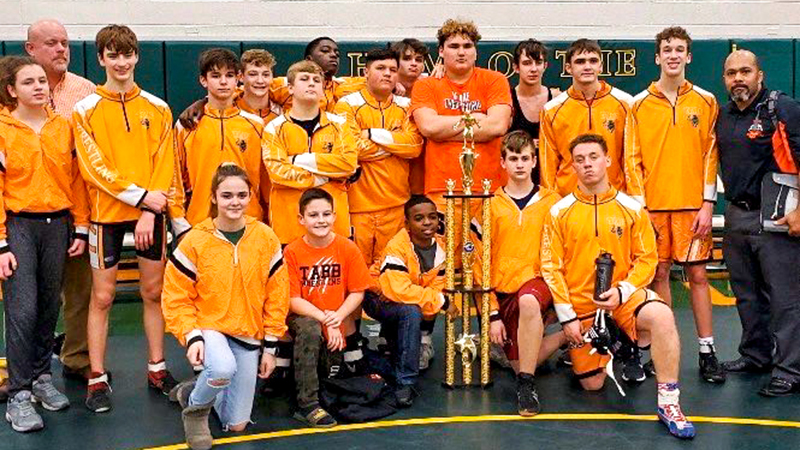 The Tabb wrestling team has been wrestling well throughout various parts of the season this year, including at the Battle of York County in which they took home the team crown. It was a strong accomplishment for a Tigers team that had set that out for themselves for this year.

“Winning the battle of York County was absolutely a goal for us this year,” Tabb Coach John Wright said. “We wrestled some good matches that night.”

Tabb has a young team this season, with only two juniors and two seniors. Wright is looking forward to the forthcoming postseason to see how the Tigers can challenge themselves.

The young Tigers have been wrestling well in the heavier weight divisions. Landon Hedrick, who wrestles at 145, just came off a performance going 5-0 at the Warrior Duals at Nandua.

Joel Martin at 182 is expected to be a state place winner for the Tigers this season. Wright feels Martin has stepped up as a leader on the team and is making everyone around him better.

Xavier Martin at 220 has had an incredible first year. Xavier, who is the brother of Joel, could also place at the state tournament. D.J. Uribes at 285 is a light heavyweight, weighing 240 pounds. Uribes has been able to use great positioning, speed and technique to topple a lot of larger opponents.

As the postseason approaches, Wright has been emphasizing pace. He wants the Tigers to be able to dictate the pace in these postseason matches they will be competing in.

“Pace, pace, pace,” Wright said. “Our guys know how to wrestle, and their conditioning is great. Our big focus going into the postseason is to dictate the pace of matches at the first whistle. When my guys wrestle their style and control the pace of the match, good things happen for us. Wrestling in the National Division a few weeks ago in the Virginia Duals has helped my wrestlers see and feel a new level of wrestling tempo.”

With the Tigers having so many young wrestlers and the potential for state placements they could have this season, it will be a good building block for the Tigers going forward into next season. The Class 3A region will be competitive, as well as the Class 3 as a whole throughout the state.