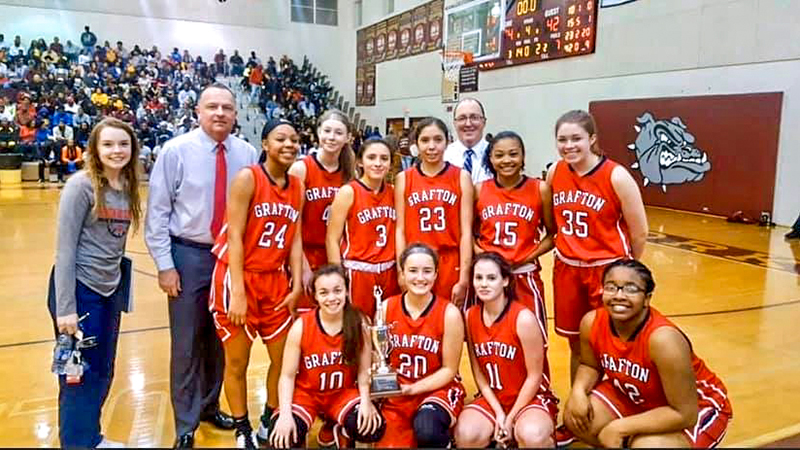 The Grafton High School girls’ basketball team earned a state tournament berth after advancing to the Class 4A region championship.

After putting together two wins in the Class 4A region tournament, the Lady Clippers were able to advance to the state tournament. Grafton went into the tournament with the No. 2 seed opening up against Heritage High School and getting a win. Grafton then went on to meet King’s Fork High School in the region semifinals and was able to escape with a three point win. That set up a matchup between No. 1 and No. 2 as they faced Hampton High School.

Even though the Lady Clippers went on to lose to Hampton, reaching the region championship automatically qualified them for the Class 4 state tournament. Coach Tommy Bayse felt good about the way his girls competed in the region among some tough teams.

“We had a good draw, but we still had to play some tough teams,” Bayse said. “A lot of the teams in our region play a different style than the teams in our district, and I felt the girls did a good job handling that for the most part. We kind of ran out of gas against a tough Hampton team.”

With Grafton being the 4A runner-up, they will face the 4B champion on the road. Bayse believes that the region tournament will have prepared the Lady Clippers once again for the type of teams they will face statewide.

“I told the girls we just have to have the mentality to know we can play with these girls,” Bayse said. “These teams are going to want to speed us up, and we are trying to slow it down. We just have to make sure we are taking care of the ball when these teams try to attack us defensively.”

Grafton will play the winner between Monacan and Hanover on the road March 6.