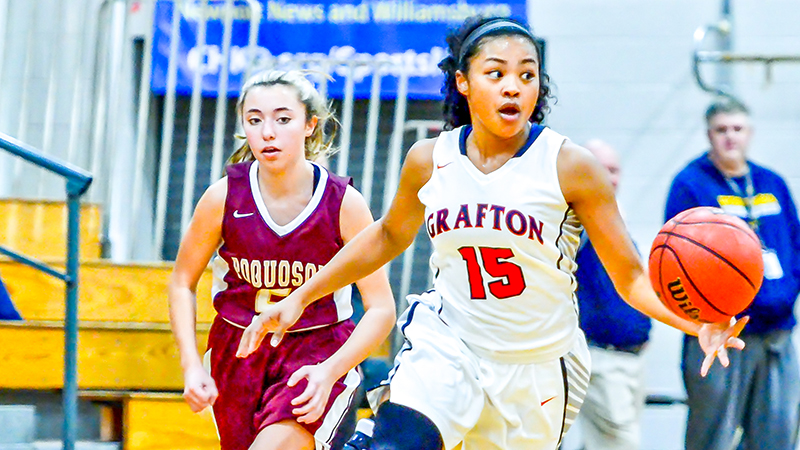 Nyah Chisolm looks to make a play. The Lady Clippers finished the season with a 23-3 record. (Thomas Matzke/Sunlake Sports)

The Lady Clippers can look back on this season and be proud of all the things they were able to accomplish. They finished the regular season with only one loss and a share of the Bay Rivers District crown. They went on to earn the No. 2 seed in the region and advanced all the way to region championship game that qualified them for the state tournament. They took on Monacan High School in the first round of the state tournament and took a loss. Monacan jumped out to some early momentum the Lady Clippers couldn’t recover from.

“We ran into a tough Monacan group,” Bayse said. “They are a good team and came out strong on us, but the girls did a good job regrouping.”

However, Coach Tommy Bayse was happy with the season in its totality and what he and his group was able to accomplish. Heading into the playoffs, many didn’t know how Grafton would fare, because of the competition they faced from other teams in other districts throughout the region and state. Grafton got a nice draw in the region, defeating a Peninsula District team and a Southeastern District team.

“We had a great season,” Bayse said. “We finished the season as co-district champions and runner-up in our region. I’m pleased with our season, with us finishing 23-3. The girls were very good throughout the whole year. In a tough region, we saw some good teams and got some good wins.”

With five seniors moving on after this year, Grafton will be returning a lot of underclassmen with experience next season. Bayse is looking forward to getting back in the gym and getting back to work with his group of returners as they continue to build on a strong season from this year.

“I kind of challenged my underclassmen, like ‘Hey we need to get in the gym as soon as we can,’” Bayse said. “Once we get back in the gym and start back working again, we are looking to take this thing to the next level.”